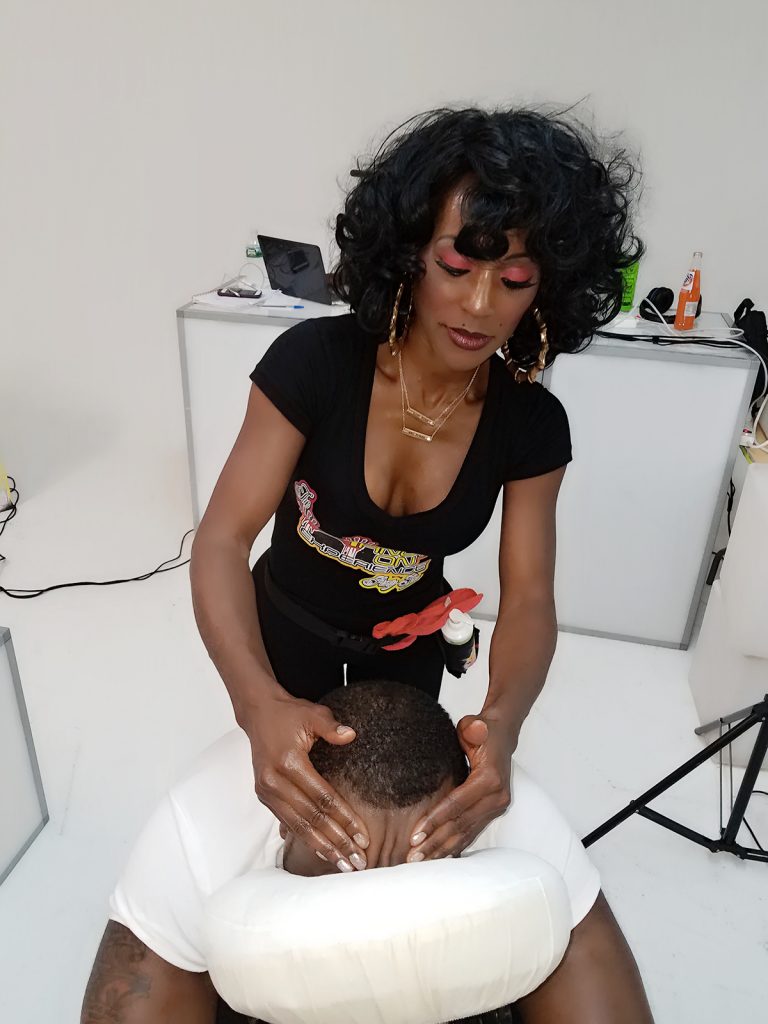 Although just recently founded, the company counts many celebrities as clients due to Woods’ entertainment industry connections and referrals from her years in the business. In addition, she is passionate about critical issues such as domestic violence and sex trafficking, and works with charities such as the United Luz Foundation to raise awareness and help combat abuse and exploitation. Follow Valencia Woods and Massage & Body Work by VDOT on Instagram, Facebook, and Twitter, and read more about her journey below.

I went to [the School of Performing Arts], which is now Fiorello LaGuardia High School of Music & Art and Performing Arts. A [fellow] actress and I used to massage each other all the time. We were always dancing — ballet, modern, tap, and jazz– so our bodies were pretty sore. I realized that I was good at it, and a lot of people wanted me to massage them– my mother, my cousins, anyone that would let me massage them, I would massage them.

I had lived in California for a couple of years and then moved to New Jersey. I said to myself, “I’m going to get up and I’m going to go to massage school, and I’m going to do it.” I finished in a year instead of two years. I went full-time, and I really put my all into it. After I graduated, I worked in the top-notch spas that you can think of in Jersey. I took a break for a little while, and then got back into it because I ended up working for a company called The Party Spa. It’s a celebrity mobile spa, and I did really, really great at that company. I guess I blew my status up, and I just decided to take it to another level and start my own company, which is called Massage & Body Work by VDOT. With The Party Spa, we ended up doing lot of celebrities, but I’ve done celebrities before The Party Spa. I learned a lot from the company, and I decided that I needed to branch out on my own and do my own thing.

Also, every Monday I work for a show called “Party and Bulls*** Show” which features Jack Thriller from ThisIs50.com. A lot of celebrities come through there every Monday, and I’ve had the pleasure of massaging [Michael Rainey Jr., who plays] “Tariq” from “Power,” Tomike Ogugua from “Power,”  a lot of actors, and hip-hop artists. It’s been a pleasure. I’m really into the therapeutic purposes of massage, but all of the pomp and circumstance that comes along with it is always a pleasure.

On being a successful entrepreneur

I’m just a good hustler. I get out there; I network well. People hire me once they feel my hands. They’re like, “This girl is the truth; she knows what she’s doing.” I graduated massage school with a 3.62 GPA, which I’m very proud of, and I really am passionate about my occupation. I’ll do it until I can’t anymore.

The response that I’m getting from people is vey overwhelming. I’m embracing it, but I’m very humbled and overwhelmed by it. It’s just really a nice feeling and a nice situation. I really want to take it as far as I can take it, as far as opening up lots of mobile spas everywhere, and actual spas. That’s my ultimate goal. And teaching the benefits of therapeutic and holistic massage.

Be patient and be humble… don’t be selfish. Don’t be too shy to ask questions if you don’t know [something]. Go out there and network, and continue your education. And always be positive, even on a bad day. When there’s a bad day, you have to make it a beautiful day. You have to make a rainbow out of it. I’m never giving up.