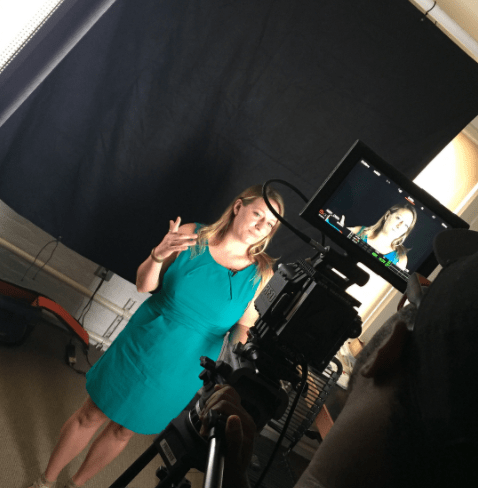 Tinder for film and TV jobs

Cinematcher— a matchmaking app currently available on desktops or iOS– is transforming the way actors, crew, and production companies across the world connect with each other. Founded in March by former NBC and Universal Pictures marketing and film professional Lauren Magura, the app quickly became known as the Tinder of the movie and television industries. After completing a brief profile and linking a resume and social profiles, a unique algorithm and geolocation match users to available projects, and allows them to search and filter results. There is also a networking component that allows members to check into festivals, meetings, and other industry events, in addition to viewing and messaging other Cinematcher users. Magura also puts local talent and diversity first, and partners with several organizations to encourage equal representation in front of and behind the camera. Learn more about #FMFeline Lauren Magura and Cinematcher in the exclusive FM Hip Hop interview below.

FM HIP HOP: What encouraged you to keep going when you were first forming Cinematcher?

LAUREN MAGURA: As a first time startup owner, it can definitely be easy to throw in the towel with all the obstacles you have to overcome to be successful. But what has always kept me going is the end goal to disrupt an industry and make some real change. Think about how technology has changed the way we date, order food, get a car. It was truly baffling that we are not using this technology to allow the hiring of ANY one in ANY location with ANY background for an industry that should be sharing stories about ANY one in ALL locations, with ALL backgrounds.

Cinematcher has the opportunity to be a serious gamechanger in an age where content is being created at a record speed. Every industry creates content now, so there are enough local jobs that should be keeping content creators with stable work, and we want to be that stability for the industry. The idea that one day I can jump on an app, see that a web series, or a commercial or a feature is shooting three buildings down from me, and swipe right to connect and get work and experience, is definitely what keeps me going. I see a world where content creators can be traveling, on vacation even, and feeling creative they can jump on the app and browse shoots happening in every town in the world.

FM: What advice do you have for those who have an app idea but who aren’t developers?

LM: I think the main advice I would have is to talk and have an informational with someone who has gone through it before. The more research and knowledge you have and what all the steps will look like, the more successful you will be having a clear timeline and roadmap of what the lifetime of your product is. I definitely went into it super naïve, jumping on Elance or Freelancer and being like, “Oh wow, I can get a native iOS and Android app built in three months for $5,000? Wow, so simple– why doesn’t everyone do this?” Any developers reading this are probably laughing – those are not realistic milestones. And you can waste time and money by not being realistic on how long and how much it will cost to develop your product.

I lucked out, and met my current developers, DecemberLabs, when I was chosen to showcase at the “Startup Spotlight” at SXSW last year. But doing your due diligence with the people who are developing your product is also super important – calling their prior customers and getting feedback, downloading the work they have done and testing out the user experience etc.

FM: How does Cinematcher encourage the hiring of underrepresented populations?

LM: Cinematcher has a diversity feature which enables users to identify as a diverse individual or owned company including women, LGBTQ, minority, veteran and disabled. Our feature then allows users to browse matches using a filter using those diverse choices. To identify as, or filter as these diverse options is completely optional. If a creative production, company or individual wishes to work with a diverse content creator or company, they have the option to browse local matches of people that may have not been given the opportunity otherwise.

We also have been partnering with and sponsoring events of film festivals, organizations, and groups that celebrate and encourage diversity around the globe, to grow the most creative and talented user base on our app. We have sponsored events with New York Women in Film and TV, the Winter Film Awards, St. Francis College Women’s Film Festival, Cinetech Expo, DC Shorts Film Festival, RushTera, Imagine This Women’s International Film Festival, [crowdfunding and streaming platform] Seed&Spark and many more. We are also supporting a national initiative called ‘Hometown Heroes’ presented by Seed&Spark, and really awesome filmmakers Mark and Jay Duplass. Filmmakers crowdfunded [feature films in their hometown] through Seed&Spark and will all get personal crew concierge from Cinematcher.

FM: What has surprised you about the reaction to the app?

LM: I think what really surprised me are two polar opposite things – how excited the filmmaking community has been when they hear about it, and then how getting them to start posting projects on it has been the biggest challenge. The main skepticism, I think, in the industry is working with someone you don’t know or was not referred to you, and being able to trust our platform enough that there is awesome local talent on there. I noticed that when they see that it actually works, or hear a referral that it actually works from a friend, that is when we start getting the most traction. But the biggest reward is once they get on the app and start posting, they get some really awesome connections and create really cool projects. And the even better part of that is, those users turn into our biggest supporters and advocates.

FM: What’s next for Cinematcher?

LM: SO many cool things! We have a ton of features we are adding into the app to better our user experience. And for the hundreds of e-mails we get about Android, we are super close to our Android launch! We also have some really cool features that we believe will revolutionize the ease and speed [at which] our users get paid. We are also currently raising a seed investment round, and would love to take on investors who are in the industry, and truly believe in our vision.

FM: Are there any other projects that you’re working on?

LM: I can’t say too much of the other projects I am working on just yet, but I am working on executive producing a really cool concept with two other super talented creatives. I have a love for creating, so I am dabbling in all aspects of the industry, and helping produce or create content when I can.