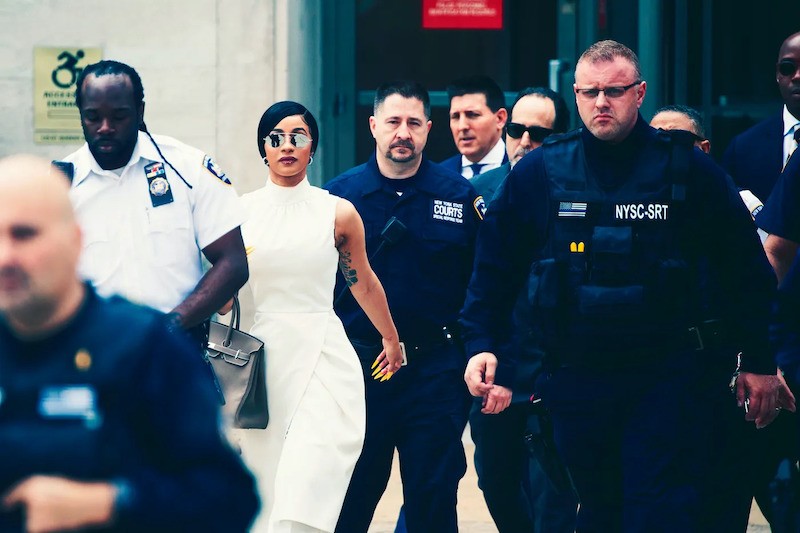 Cardi B has pulled off yet another success in the courtroom, despite a recent barrage of stressful legal troubles resulting in a lawsuit against her.

With Tasha K, Jade, and Kevin Micheal Brophy, Cardi B faced many lawsuits and has repeatedly stood trial in recent months to defend her name.

Luckily for Cardi B, the defamation suit with Tasha K resulted in a landslide win. She also only received 15 days of community service for the strip club fight that injured Tekashi 69’s girlfriend, Jade. Now, the “Bodak Yellow” artist can thank lawyers again for proving she didn’t misuse Brophy’s likeness on her 2016 “Gangsta Bitch Music Vol. 1” mixtape.

A W For Cardi B

A federal jury determined yesterday (Oct 22) that Cardi B did not misappropriate Brophy’s back tattoos for her risqué mixtape cover. Upon the judge reading the verdict, the Bronx star embraced her attorneys and appeared extremely happy with the outcome.

“I wasn’t sure if I was going to lose or not,” Cardi admitted after leaving the courthouse. Similarly to her assault case back in September, the “Shake It” artist faced many cheers and paparazzi outside the building. “I told myself if I win, I was going to cuss Mr. Brophy out. But I don’t have it in my heart to cuss him out,” she continued.

It’s worth noting that Cardi and Brophy had a short but respectful conversation during court proceedings.

The trouble began a year following the drop of “Gangsta Bitch Music Vol 1.” The cover depicts Cardi B engaging in sexual activities with a man donned in some of the same back tattoos as Brophy. According to him, this caused “distress and humiliation,” although the man’s face doesn’t appear.

According to Brophy’s lawyer A. Barry Cappello, the tattoos are a direct copy from a magazine onto the mixtape cover. “At the end of the day, I do respect you as an artist,” the former tattoo model said on the court.

The “Up” artist, per usual, didn’t hesitate to jump to her own defense. She fired back on Cappello’s claims saying the mixtape artwork hadn’t damaged Brophy’s life. Instead, Cardi B claimed the ongoing lawsuits have impacted her personal life, pointing out she missed her daughter’s “first steps” due to the trial.

Still, Cappello insisted the “WAP” rapper knew about the photo editing, which she denied assertively. The back and forth apparently got so intense the judge cleared out the courtroom and even considered a mistrial.

Subsequently, after the break, the judge condemned both sides of the argument, calling it “unprofessional” and “not productive.” Regardless, the questioning continued.

Cardi then claimed only a “small portion” of Brophy’s back tattoo appeared on the cover unbeknownst to her. The 30-year-olds primary defense was that Timm Gooden, the artist behind the photo, had fair use laws on his side.

Capello responded with claims that Gooden used Google to look up “back tattoos” to find his client’s likeness. But according to Cardi’s lawyer, Peter Anderson, Brophy, and the fictional mixtape man don’t match up. He specifically pointed out the artwork doesn’t feature neck tattoos, while Brophy does.

“It’s not your client’s back,” Cardi said. One significant factor that likely led to the jury’s decision is the stark difference in the mixtape models’ appearance. Kevin Micheal Brophy is a Caucasian model and skater, and the artwork explicitly depicts a black man. “It’s not him,” she doubled down. “To me, it doesn’t look like his back at all. The tattoo was modified, which is protected by the First Amendment.”

She then addressed the lack of any real consequences from the mixtape. Apparently, Brophy has his own surf and skating merch brand that’s going strong to this day. “He hasn’t gotten fired from his job,” she said. “He hasn’t gotten a divorce. How has he suffered? He’s still in a surf shop at this job. Please tell me how he’s suffered.”

Although it wasn’t an easy win for the mother of two, it’s another task she can cross off her chaotic 2022 checklist.