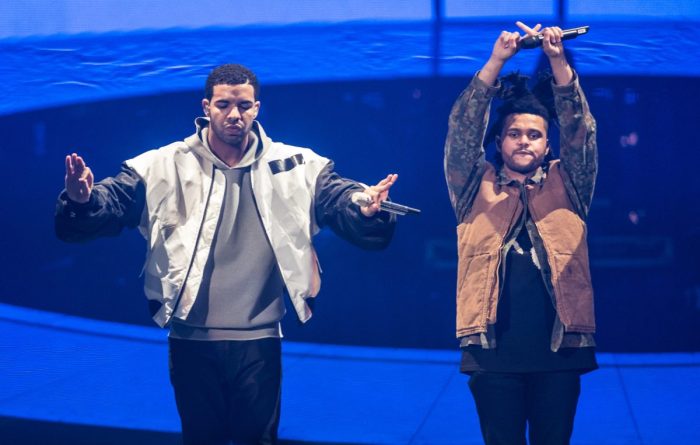 NOTTINGHAM, UNITED KINGDOM - MARCH 16: Drake and The Weeknd performs on stage during a date of his "Nothing Was the Same" 2014 World Tour at Nottingham Capital FM Arena on March 16, 2014 in Nottingham, England. (Photo by Ollie Millington/WireImage)

It’s safe to say Drake and The Weeknd are on good terms again.  After years of their on and off friendship, Drake decided to take a minute to reminisce about the R&B singer.  Known for making hits like “Crew Love”, “The Zone”, & “Live For It”, the Canadian duo has been running the music scene.

Related article: Experience the magic of Drake and The Weeknd on Drake’s Take Care album(2011).

Drake took to Instagram to detail the first time he heard of Abel, aka The Weeknd.  He explains that Oliver El-Khatib played him some of The Weeknd’s early songs in Toronto.  You can tell in the video that Drake is amazed at how far Abel has come.  From listening to his songs and not knowing who he was in his apartment in Toronto and now that same guy is selling out the Sky Dome.

Drake shares when he heard The Weeknd’s music for the first time ‼️🥺
pic.twitter.com/9Acu2foIW6

Even though the Champagne Papi said Sky Dome, the stadium is actually named Rodgers Centere and has been since 2005.  Guess Drake is not letting that childhood memory go.  Rodgers Centere is home to the Major League Baseball team, the Toronto Blue Jays.  It holds about 55,000 people and all 55,000 seats will be full when The Weeknd performs there tonight.  The Weeknd’s After Hours Til Dawn Tour starts tonight in his hometown.  Fans would have gotten a special treat if Doja Cat was going to perform, but throat surgery in May kept her from being a part of the tour.  Mike Dean, Snoh Aalegra, and Kaytranada will be filling in for Doja Cat.

After Hours Til Dawn Tour

This is the first leg of the tour which is for the United States and Canada.  From tonight until September, The Weeknd will be making 18 stops which include Philadelphia, New York, Boston, Miami, Las Vegas, Chicago, and Los Angeles.  They will announce dates for the second leg of the tour soon. As of right now, we know The Weeknd will be stopping in Mexico, Europe, Africa, and Asia on the second leg.  Drake wants to let anyone know that if you’re trying to make it in the music business, you can.  It’s not impossible for anyone, no matter where you come from or how long it takes.