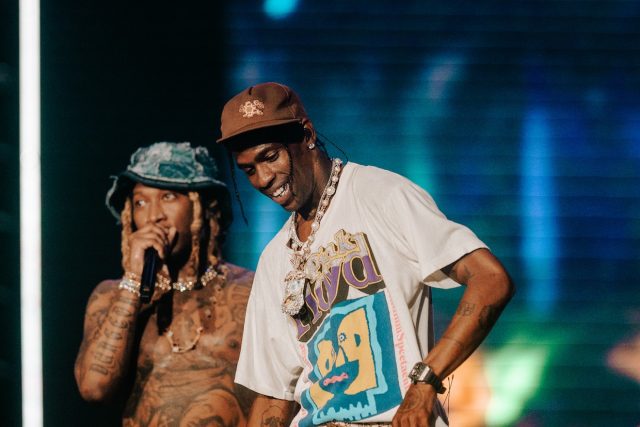 Many artists that took the stage at the Rolling Loud Miami festival. Some even brought out special guests. On Saturday, July 23rd, Future surprised many fans during his headlined set as he welcomed Travis Scott to the stage.

According to Hip Hop DX, rumor has it that Travis Scott was banned from performing at Rolling Loud as 10 people were killed during his Astroworld Festival back in November of 2021. The source reports his banning may have been the reason Kanye West stepped down last minute from headlining Friday’s show and was replaced by Kid Cudi. However, a spokesperson for Rolling Loud updated us in regards to Travis Scott’s headline saying, “We reached out to Travis to headline Rolling Loud, but it couldn’t work in such a short time. This had nothing to do with any restrictions from the hosting venue Hard Rock Stadium.”

As the festival welcomed Travis back to the stage, he performed several verses starting with “Hold That Heat” and “Goosebumps.” At Future’s request for Scott to stay, they then performed “March Madness.”

Although fans went wild over Scott’s return to the Rolling Loud stage, the rapper still faces many lawsuits. Other than the recent tragedy at Astroworld, in 2019 Scott’s Rolling Loud set got crazy as a stampede broke out. Concertgoer, Marchelle Love, claimed her leg broke during the stampede. Other fans were trampled as well as the crowed became extremely rowdy. She also stated local police and security had to step in but the situation was ignored by Scott.

Rolling Loud Miami 2022 has been a success with a series of events!