Fans of Halle have been anticipating the upcoming adaptation of  “The Little Mermaid,” in which she stars Ariel. However, many may not know that Halle Bailey is also staring in the readaptation of Alice Walker’s “The Color Purple.” And according to reports, production is complete.

Today Halle went before the world with an enthralling announcement. She now has two major motion pictures under her belt in less than a year and a half. Halle Bailey’s words read thus,

“I’m so very grateful to have had this experience, My second major motion picture complete in the last year and a half.”

Completing two films in such a short period is an outstanding achievement. And Halle is not the only one bursting with pride and excitement.

Halley Bailey, the sister of the phenomenal songstress Chloe Bailey, has been on the grind. Both sisters have given the world a pinch of their talent as a pair. Respectfully, Beyonce knew what she was doing when she signed the indomitable pair.  And now both are giving the world something to savor in their individual lanes.

The announcement that Halle was being considered for the role of Ariel in the adaptation of Walt Disney’s “The Little Mermaid” set the press ablaze. Despite the controversy, in 2019, Bailey snagged the role. Her fans were ecstatic about her first major motion picture. The representation Halle would bring in the deliverance of her role as Ariel alone was incredible.

Halle Bailey and the Cast of ” The Color Purple”

Today Halle gleefully announced that the filming of the film is a wrap, and she did so with some of her favorite photos from the shoot. One of the photos included an exceptional still shot beside the legendary Oprah Winfrey (Sofia).

i wrapped tonight at 3am on set for the color purple 😭🥹💕🎥 pic.twitter.com/ZwUWKpv9JK 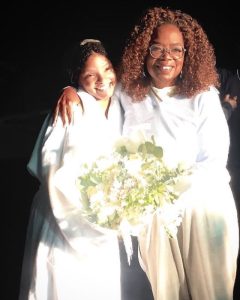 Amazingly Bailey gets to reprise the part of Celie’s sister Nettie made famous by Ghanian actress (Akosua Gyamama Busi). And she is joining a spectacular cast Danielle Brooks (Sofia), Taraji P. Henson (Shug Avery), H.E.R (Squeak), and Fantasia Barrino (as Celie),  made famous by Whoopi Goldberg. What is even more exciting, Quincy Jones is on board as producer along with Scott Sanders.

Today Bailey is indeed not the only one who is beaming with pride. Oprah also gave Chloe flowers at the close of production as a show of pride and appreciation. Undoubtedly her sister Chloe who recently dropped a hot new single, “Surprise,” is ecstatic for her sister.

Congratulations from the FM Hip Hop Family to Halle on her accomplishments. We know this is only the beginning. And we can hardly wait to see her on the silver screen as Nettie in December of 2023.