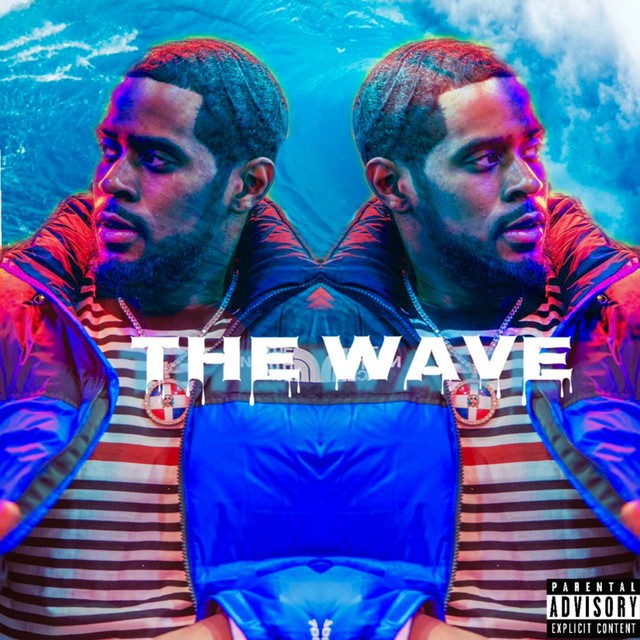 Sizzle keeps the listen hot by integrating a feel of the drill sound with a booming bassline and a laid-back attitude. Since he’s from Downtown New York, the rapper works hard and won’t get any shut-eye until he gets a bag or two. Before adding in his staple, “Ju heard,” Sizzle often speaks on what he’s been blessed with, how he moves, and the kind of people that are quick to rain on his parade. Despite the frauds and haters, though, Sizzle remains level-headed and unbothered by their treacherous acts. His latest project, The Wave, explores these themes in-depth, along with others like motivation and staying true to one’s self. “The steps I took for my project was I linked with my producer Smoke, and I just vibed to a couple of beats,” he continues “I started feeling them, then I started writing.” Although you won’t catch the rapper doing backstrokes around in the swimming pool, you can peep the waves in his hair, which is, as he puts it, is always on swim. “My sound is a gritty, grimy New York sound with some down south drill.” Sizzle continues. Off The Wave, Sizzle says he has no particular favorites, “They all hit different and put me in a certain mood. Forever live The Wave.”

Sizzle got his name from playing basketball, and he decided to keep it when he went the music route. Since he was young, Sizzle has been creating music. In elementary school, he’d jot rhymes in his notebook, which turned into Sizzle recording in studios. “The first day I recorded was in a home studio. That experience was pretty dope; I can’t front. I was super excited to hear my voice,” he says, “My hometown has influenced me on me making music. The poverty, projects, the good the bad, and the ugly. My hometown has given me my essence.” His advice to aspiring rappers is to be themselves and to believe in their music no matter what. “I don’t care if you’re a mumble rapper or a lyrical rapper, believe!” he continues, “Don’t chase after any of these rappers just because they’re in the industry!”

Some standout tracks on The Wave include “Bands,” “Open Ya Eyez,” and “Harder.”

“Bands” sees Sizzle boasting about his greatness, his Mr-Steal-Your-Girl ways, and staying clear from any negative vibes. Deep into the rhymes, he uses his voice to project what it means to be real. Elsewhere, Sizzle also goes to say that he’s one of those individuals that hold weight on the trait. One thing the rapper makes sure of is to stay far from those who anonymously carry a knife behind their backs. He’d rather hang with those who keep it a rack while he’s getting racks. Throughout “Bands,” Sizzle carries a bouncy cadence that goes well with the beat’s menacing piano riff and knocking baseline. Sizzle goes to say that he’s lit, and that’s why he’s able to say what he pleases. One notable line goes, “Get to the bag, keep it a rack. We blowing gas.” Surely even before this song, you’ll already be a fan.

At one minute and fifty-four seconds, “Open Ya Eyes” explores Sizzle’s current mindset. Like the chorus says, he’s taking what’s his and refuses to let anyone get in the way. Because of this, the rapper isn’t afraid to call out fake individuals. Still, he isn’t sweating it because his eye is on the prize. As the song continues, Sizzle also explains how he lives by the code. Success isn’t too far out of his reach, so he’ll go the distance to make power moves happen. In “Open Ya Eyes,” Sizzle uses a fast delivery that meshes well with the song’s catchy hook. The beat uses an eerie piano riff, sporadic hi-hats, and an intriguing shriek recording that fades in and out.

Afterward, Sizzle encourages others to keep grinding on “Harder.” At the beginning of the song, listeners can hear some words of advice from the rap icon, Nipsey Hussle. “The best teaching in life is your own experience,” says Hussle. “None of us know who we are until we feel. They say every man is defined by his reaction to anything.

Listen to The Wave by Sizzle below: