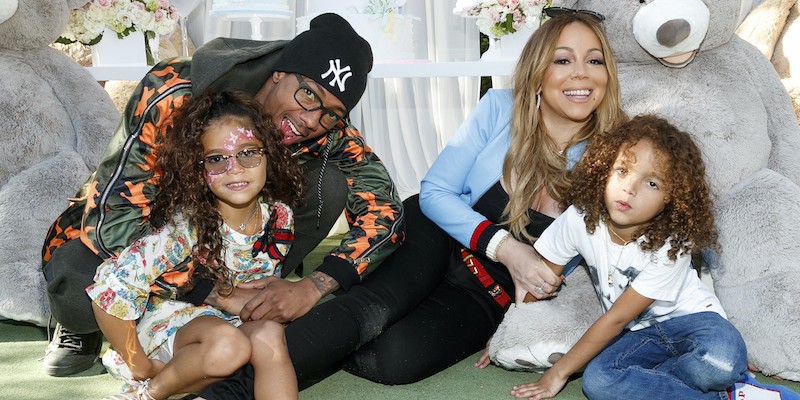 Mariah Carey's and some of Nick Cannon's children with their parents. Image source: Rich Polk/FilmMagic.

“Wild ‘N Out” star Nick Cannon has made yet another addition to his controversially large family unit with the 9th child. Somehow it’s still shocking.

This comes only one week after his Guam vacation with Brittany Bell, mother of two of his children. In addition to this, Bell is currently pregnant with their third child. Clearly, Cannon isn’t interested in slowing down anytime soon.

“Introducing ONYX ICE COLE CANNON,” the 41-year-old typed. “Once again Today I am in Awe of the Devine Feminine! God has given me and @MissLanishaCole the privilege of hosting an Angel here on earth. I vow to protect, provide, guide and love this child to the best of my abilities.” He continued to confirm his disregard for negative comments surrounding the rapid growth of his family tree.

“In this moment of celebration and jubilee, I wish to mute any low vibrational frequencies and only rejoice with the Highest Class of Civilization who are truly aligned with our purpose…,” he typed.

Nick Cannon Defending Himself & Others

Well, Nick certainly has plenty of muting to do. The mix of confusion and disapproval from his fans could be seen all over social media immediately following the birth announcement. “This is all so weird nick cannon,” one fan commented. “This is crazy for real…congrats or whatever,” another quipped.

Impregnating such a large number of women in a small span is definitely unconventional but isn’t deterring the “Drumline” actor. Apparently, Nick Cannon also sees the birth of his 9th child as the 9th way to increase his Christian faith connections.

“I’ve given up on attempting to define myself for the world or society but instead I’m doing the work to heal and grow into the infinite Being God ordained me to be,” Cannon explained.

He ended the lengthy post with a request to deter criticism from his extensive list of baby mothers. Instead, Cannon is willing to take any heat on his own.

“As we all know I am not easily triggered and have quite tough skin and have always been an open book but not everyone in my family has that same level of strength,” Nick Cannon wrote. “So I pray and ask others to please project all criticism and cynicism towards ME and not the loving and precious Mothers of my children.”

Lanisha’s post, on the other hand, is less informative (and less religious), only having the baby’s name and birthdate.

As Nick’s ménage seemingly overgrows, so do his child support expenses. In an interview with The Sun, family law attorney Goldie Schon estimated Cannon spent nearly $3 million yearly on child support payments. When calculating the sky-high figure, the California-based law professional credited Cannon’s numerous income and the sheer volume of kids. Of course, this is an unconfirmed figure, as Nick hasn’t spoken on the matter publicly.

“When you have somebody like Nick Cannon, who’s an extremely high-income earner, the courts in California have the right to deviate from the typical child support guidelines,” she explained to The Sun.

Even with the unusual nature of Nick’s habits, there seems to be a method to his madness. Cannon noticeably gets the same women pregnant repeatedly, with Brittany Bell and Abby De La Rosa both bearing 6 kids between two. Model Bre Teisi also recently had her second child with the famous TV host.

“It’s almost like … he’s getting a discount with Abby and Brittany having a third child,” Schon discussed. California child support laws evidently favor those who keep things in-house.

Regardless if Nick Cannon has a plan set in stone, it’s not stopping the world from scratching its heads. Many are concerned with how so many kids will receive equal care and attention across different households. Some opted for jokes and memes about the situation.

Every time the hospital staff sees Nick Cannon arriving with a woman ready to deliver. pic.twitter.com/wlIscCLCsu

I blocked Nick cannon bc I don’t wanna see all that. Every day you delivering a baby.

if i'm Mariah Carey, id lowkey be mad annoyed w Nick Cannon 😭 like now my kids got 10 siblings from 5 different households and shit

I feel like I’m dreaming.. why is it ok for Nick Cannon to father all of these kids w/ no type of commitment to these women? Are we really just having children for fun & publicity now? I’m sorry but I would be UPSET as one of those kids. All of this is very selfish.

Nick Cannon is so irresponsible. Some people will claim that as long as he has $$ he's taking care of them. Yall must not have grown up with your fathers. A father's role is way more than $. Quality time is the #1 thing a child needs. Not a check and an occasional photo shoot. https://t.co/XU0YJ9lgfl

However you may feel about Nick and his choices, baby number 10 is on the way. As “Wild ‘N Out” goes into its 19th season, its host continues to spread himself thinner and thinner.