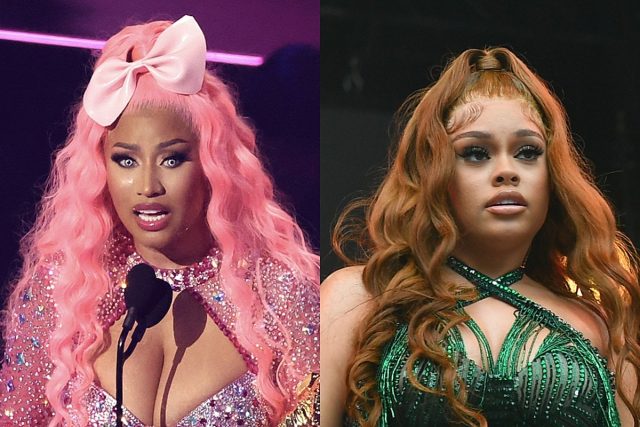 Nicki Minaj and Latto got into a war of words on Twitter. Late Thursday night, Nicki issued a tweet voicing her displeasure over the Grammys placing her song “Super Freaky Girl” in the Pop category. The decision came after the Bronx native submitted the song for consideration in the Rap category.

Nicki Minaj went on to draw comparisons to Latto’s popular track “Big Energy,” which is under consideration for Best Rap Grammy. “I have no prob being moved out the Rap category as long as we r ALL being treated fairly,” Nicki tweeted. “If SFG has 2B moved out RAP then so does Big Energy! Any1 who says diff is simply a Nicki hater or a troll.”

I have no prob being moved out the RAP category as long as we r ALL being treated FAIRLY. If SFG has 2B moved out RAP then so does Big Energy! ANY1 who says diff is simply a Nicki hater or a troll. I’d actually LUV 2 c a more street record win- male OR female! IJS rightIsRight 🫡

The Queen of Rap’s comments come after Latto faced similar criticism from Kodak Black for winning Song of The Year at the 2022 BET Hip Hop Awards. The “Soufside” artist took to social media to respond to Nicki’s post. “D*mn I can’t win for losing…all these awards/noms I can’t even celebrate.”

While Latto agreed with Nicki’s initial sentiments, she privately messaged the Barb to address the issue. “I don’t think you need to bring my name/song up to prove a point,” the text read. But in true Nicki fashion, she didn’t hold back.

Nicki would post a screenshot of Latto’s message, calling her a “Karen.” She also criticized the Atlanta native for claiming to be a fan but not speaking up “for the Black woman she called her biggest inspiration.”

Throughout the night, the two would engage in a war of tweets and screenshots criticizing each other. Latto even posted screenshots of Instagram messages between them, claiming that Nicki has been throwing shade since March.

I literally named u as my dream collab multiple times in multiple interviews… like I told u otp I looked up to u… u still never answered my question about where the random shade started coming from https://t.co/DpKSKepkVQ pic.twitter.com/XNkzDBiDWw

Judging by the nature of the exchange, it looks like things will end smoothly between the two female rappers.