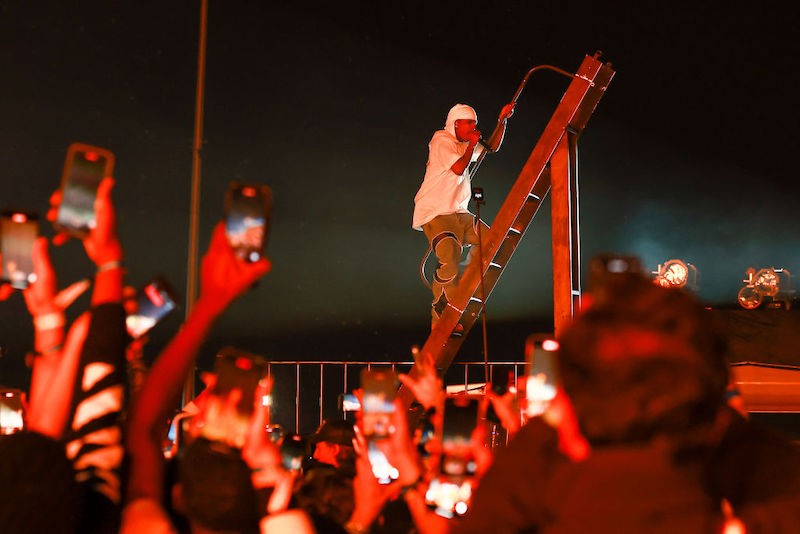 A$AP Rocky is yet another rapper unhappy with this year’s Rolling Loud Festival.

Rolling Loud in New York has been a mix of exciting and disorganized according to the stars on its lineup. Newcomers like Ice Spice experienced some sound issues, and 21 Savage has confirmed he’s not interested in attending ever again. ASAP Rocky seemingly isn’t exempt from the mishaps and posted to his Instagram story today to communicate with his fanbase.

Last night (Sep 24), the “Praise Tha Lord” artist performed for a massive crowd at the 2022 Rolling Loud Festival held in Citi Fields, Queens. The 30-minute set included hits like ‘Telephone Calls’ and unreleased tracks like “OUR DE$TINY.” The crowd was electric and loved the Harlem rapper’s energy, but apparently, things didn’t go according to plan.

A$AP’s set was cut short, and the East Coast MC quickly apologized for the misunderstanding. “I am so hurt right now,” Rocky typed in his notes app. “I will take full responsibility for the circumstances of what led to last nights show being everything it was and everything it wasn’t,” he continued to explain.

While A$AP obviously found it necessary to apologize, the audience looked pretty happy with the abridged set. Specifically, his special guests, French Montana and GloRilla, garnered a massive reaction from the sea of rap fanatics. You can clearly see a saddened look on Rocky’s face near the 32-minute mark of his set, likely wanting to continue for another half hour.

The fans in attendance didn’t mind, but social media is another story. Some A$AP’s fans expressed annoyance with his apparent lateness and filler content between songs that caused the celebration to end early. “love rocky to death but that set was so ass and delayed but at least he acknowledged it,” one Twitter user typed.

“It would be easier if you weren’t late for your own shows,” another responded.

ASAP is always late to his shows. Kinda disrespectful of him when fans come out to support he just expects people to wait. It's whack.

I waited all night long for you. I bought a one day pass just for you. I’m very disappointed in you and Rihanna.

Asap Rocky used to have to most lit shows… now he always be showing up late to sets and barley performing. https://t.co/bU5Hezfulv

love rocky to death but that set was so ass and delayed but at least he acknowledged it 🙏🏽 https://t.co/g42eoVOdmC

It would be easier if you weren't late for your own shows https://t.co/ek71b3giwe

Lateness wasn’t the only factor working against Rocky. NYPD enforced a strict curfew last night, which also applied to concertgoers and performers. This may also be why the performance shortened so dramatically.

Of course, it’s not Rolling Loud without a little bit of controversy.