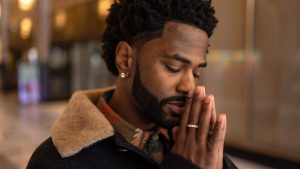 Lets not act like Big Sean isn’t a whole legend out here! With well over a decade in the game under his name (bars!) the Detroit native is more than worthy enough to be mentioned along side his legendary peers such as Kendrick Lamar, J. Cole, Drake, and Big K.R.I.T. to name a few.

As a matter of fact, some will say Big Sean has done enough to be placed on the Mt. Rushmore of Detroit hip-hop with names like Eminem, Royce da 5’9, and the late great J. Dilla following the release of his latest album, Detroit 2.

Detroit 2 is Sean Don’s fifth studio album and his first since 2017’s I Decided. One can make the argument that this is his greatest body of work out of an underrated yet, impressive catalog. The album is chalk full of star-studded features such as the aforementioned Royce da 5’9, and Eminem as well as Jhene Aiko, Stevie Wonder (!), Nipsey Hussle, and many more.

Deep Reverence can be defined as a feeling or attitude of deep respect tinged with awe; veneration. The phrase can be applied to Big Sean, as he has shown the ability to “Bounce Back“from several hardships over the years.

The late Nipsey Hussle joins Sean and speaks from the heavens on the aforementioned lead single. Both rap about life’s pressures from their differing perspectives. Nip touches on the pitfalls of gang banging while Big Sean talks about a plethora of issues he’s been dealing with from anxiety to losing an unborn child. He quips:

“Energy crazy, I realized that it’s a two-way street
What’s comin’ is goin’, if it don’t give you more, it drains you
Should be a billionaire based on the time off I’m not takin’
Probably why the shit with me get crazy and we lost a baby.”

The 32-year-old MC has been one of the select few artists that have been transparent with being afflicted with depression and anxiety. Through the years he has become an unofficial advocate for mental health and therapy. Through his music he is as honest and as forthcoming as anyone, which makes him relatable despite his superstar status.

Not seeing eye to eye can be fixed w a heart to heart. 😤🔥wisdom bars. @BigSean new project fantastic.

Despite being in his early 30’s, he speaks with the wisdom of a man well beyond his years. On this album he’s able to get his sh*t off as a pure MC, while at the same time elevate and inspire those around him. Throughout he album he flexes lyrical dexterity, surely to rival any one in the game today.

when big sean said “my girl said i got communication problems, no, i don’t, i just don’t like sharin my problems more than the results” pic.twitter.com/wlEyynP8Hf

If there were any doubts whether Big Sean was a heavyweight in rap today, Detroit 2 surely silences that. He gave us everything we could want this album in spades. Detroit 2 feels like it was meant to bring us all together.

Friday Night Cypher features an all-star cast of Detroit’s finest, including Kash Doll, Tee Grizzley, Boldy James, Royce Da 5’9″, and Eminem. This is a monumental moment not just for the city of Detroit, but for hip-hop. It shows we can put aside our differences and come together for something bigger than ourselves.

As stated before, this album most definitely solidifies Big Sean as one of the elite wordsmiths of today. This is by far his best body of work. Peace to Big Sean for persevering and being honest and transparent. You are an inspiration. Stay blessed. 8.7 of 10.