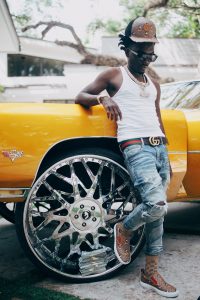 Bobby Fishscale grabbed the industry’s attention with his “Hov Flow” over Jay-Z & Eminem’s ‘Renegade’ beat, and the Florida boy is back with the newly released “No 9 to 5” music video! The Fishscale Fam representative takes us through the mental throws of choosing the street life over going legit. His nasally delivery dives into the growing pains of life in the trap over the multi-platinum DJ Swift produced beat. One thing for sure, Bobby makes it clear where he stands with lines like, “I don’t think they could take trap out yo’ blood, even if they could leave mine where it was.”

The visual totes a cinematic storyline primarily based in a dimly lit bando catching Bibby Fishscale in his element over the stove with his mistress making sure the money count is in tact. In one of his performance shots he can be seen burning up an employment application to further exclaim his position on the 9-to-5 lifestyle (and his qualifications as a love interest for B. Simone, maybe?).

“No 9 to 5” is the lead single off of his upcoming project, The Last Re-Up. Keep your eyes on Bobby Fishscale as he continues to bloom his rapidly growing fanbase. He’s caught the attention of major record labels and there’s no telling what the future holds. Let us know your thoughts in the comment section!