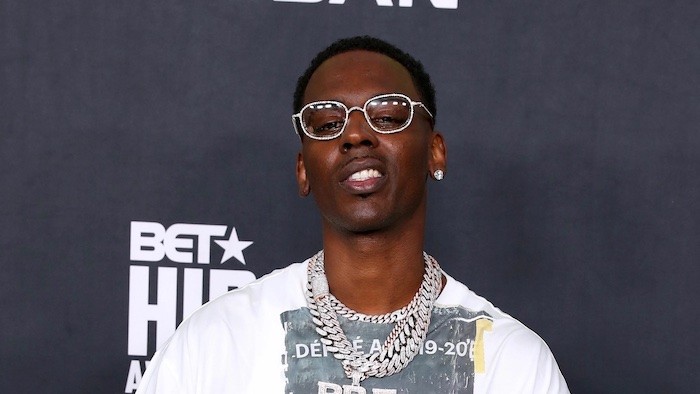 Young Dolph is dead after a drive-by shooting. Photo by Bennett Raglin for Getty Images

Young Dolph is dead after a shooting in Memphis, Tennessee. Three law enforcement sources confirmed the shooting this afternoon, on the condition they remain anonymous.

Reportedly, the 36-year-old rapper was shot as he walked into a cookie shop, Makeda’s Butter Cookies. Shop owner Maurice Hill said that as the rapper entered the store around 1 p.m., someone drove by and shot at the rapper. Just last week, Dolph was featured on the business’ Instagram. In the video, the rapper said he visits Makeda’s every time he comes home to South Memphis.

FOX13 News reported that a large crowd amassed at the scene of the shooting, some falling to the ground in tears. Dolph, real name Adolph Thornton Jr., was well-known and beloved in the Memphis community. He released his debut album, King of Memphis, in 2016, which peaked at No. 49 on the Billboard charts. Dolph regularly sat courtside at Grizzlies games and narrated one of their post-season hype videos. Locals even knew him for handing out turkeys on Thanksgiving around the city and donating money to his alma mater, Hamilton High School.

At this time, authorities have not shared any further information about the shooter.

Similarly, In 2017, Dolph ended up in the hospital after a shooting. He was shot three times in an altercation outside the Loews Hollywood Hotel in Los Angeles. Before that, fellow Memphis Blac Youngsta and accomplices attempted shooting Dolph, but he left unharmed. This time, the rapper wasn’t so lucky.

Dolph rose to fame with his High Class Street Music mixtape, catching the eye of Gucci Mane. Called “a prolific recording artist” by Pitchfork, Dolph worked with rappers like T.I., Rick Ross and Memphis mentors Three 6 Mafia. Artists like Offset and JPEGMAFIA have responded to news of his death. Megan Thee Stallion shared her disbelief via Twitter, writing:

“I am sooo sick rn I am in disbelief! Praying for his family and friends ! Rest In Peace to my friend a true legend dolph 🙏🏾”

Above all, RIP to Young Dolph, who is gone too soon.