Well FM Hip Hop universe, if you missed 6ix9ine content here is your fix. An old rival of the embattled rapper trolled the former troll king in his new video. Trippie Redd dropped his new video for “Under Enemy Arms”. In the video, a rainbow-haired rat made a cameo. It doesn’t take a genius to put 2 and 2 together. 6ix9ine has been called Snitch9ine ever since he cooperated with feds in his federal racketeering case. 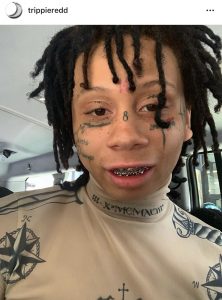 The irony of Trippie Redd’s new video is the attention the well placed rat will receive. Also, bonus points for Trippie Redd for trolling the clown prince of trolling. The 2 rappers had a good ol’ fashioned social media beef. They would spew trash talk over Instagram live. Invitations to the others piece were constantly sent. Trippie Redd called 6ix9ine a pedophile. I bet money that 6ix9ine would prefer the days when his dirty laundry was being called a pedophile. Now the rapper will be probably synonymous with a rodent for the rest of his natural life. Trippie Redd reminded him of that with his new video.

So 6ix9ine in a way had it good. Every day he was in the blogs, radio, social media and etc. One federal case later, and 6ix9ine is a forgotten man. The world thought YG was coming at him on his song “Stop Snitching”. Rappers have requested that his music be barred from clubs. Some even have pushed DJs to stop playing him on the radio. Essentially, the industry has blackballed him. Early on, Discussions were made on what would we do if we were in his shoes. Unfortunately for him, we are not in 6ix9ine’s shoes and probably will never hear from him until the case begins.