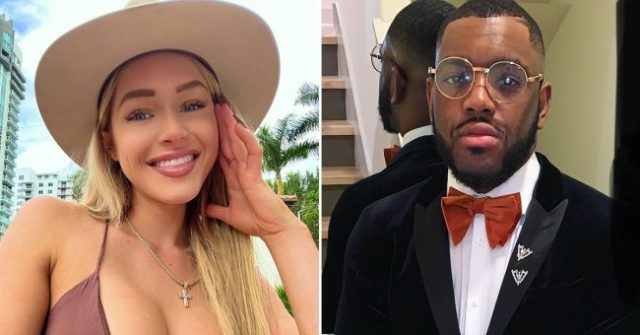 New video evidence has come to light that shows Instagram and Onlyfans model, Courtney Tailor, attacking her boyfriend. As previously reported, police responded to a call where they found Christian Tobechukwu Obumseli, Tailor’s boyfriend, with a knife wound in his heart. Obumseli was taken to the hospital where he would later be declared dead.

This later resulted in Courtney Tailor being arrested in Hawaii for second-degree murder. However, the new video is said to be captured months before his death. This indicates that Tailor assaulted her boyfriend prior to his death in Miami.

The video is taken from a security camera located in the elevator of a building. In the video, that’s only about a minute long, Tailor is shown to be annoyed while trying to pick a floor which results in her punching the screen. Obumseli walks in a few seconds later and tries to calm down his girlfriend only for her to turn and begin hitting him. She beats on him and tugs on his hair before he tries to push her away. See the full video obtained by TMZ.

Cops say OnlyFans Model Courtney Tailor was hitting her now-deceased boyfriend in an elevator just months before she killed him, according to new footage and her arrest warrant. https://t.co/pCnZdh78UI

TMZ also obtained the arrest warrant for Courtney Tailor which states the video was taken in February. The warrant states that “Courtney and Christian had a tempestuous relationship since Nov 2020, with multiple incidents of domestic violence from both sides over the period of the relationship.”

The warrant also paints the picture of Obumseli’s death in a rather graphic way. The documents also state Tailor was arrested in July of last year in Vegas for domestic battery against Obumseli. Cops spoke with Tailor’s mother who confirmed she was on the phone with her daughter at the time of the stabbing. She told officers that she could hear her daughter yelling at her boyfriend, saying he was “lying”. Cops also stated that Courtney herself admitted to killing her boyfriend. However, Tailor added,

“I really don’t know if this was justified at all.”