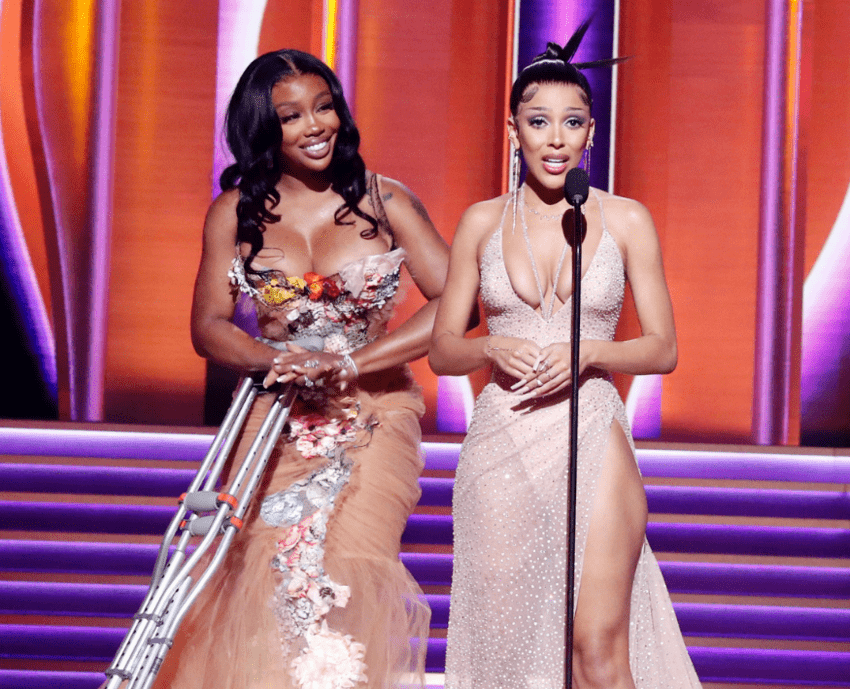 The Grammys aired Sunday night, and it was a memorable night for quite a few stars. Doja Cat and SZA won a Grammy for their smash pop hit, “Kiss Me More” in the Best Pop Duo Performance category. The song spent an impressive number of weeks at the top of the Billboard charts. The pair was up against some of the biggest names in the industry, including BTS, Justin Bieber, and Coldplay.

Canadian pop-punk royalty Avril Lavigne presented the award. SZA had some difficulty getting to the stage as she was rocking a long gown, stilettos, and crutches. Doja on the other hand came back from her bathroom break just in time. She joked about this at the start of her speech while adjusting her gown. However, despite being known for her goofy nature, she gave the audience one of the most sincere moments of the night. “Thank you to everybody, my team, my family. SZA you are everything to me, you are incredible. A talent, you’re a lyricist, you’re everything,” she said. The pair embraced and SZA gave a quick shout out to Doja, her mom, and God. At one point, the camera cut to Lady Gaga and BTS in the audience, who seemed to be smiling at the special moment.

Doja And SZA’s Long Journey to the GRAMMYs

Both artists have multiple Grammy nominations. There are 25 between two; SZA with 14, Doja with 11. But, this is the first win for both of them, a fact some found surprising. Though some wished Doja won in other categories, this is a significant moment in the singer’s career. At the end of Doja’s speech, she became teary-eyed and said, “I like to downplay a lot of sh-t, but this is, it’s a big deal.” This moment comes after Doja received backlash from fans in Paraguay and SZA got injured the day before the event. Fortunately, Doja and SZA will continue making music and, hopefully, win more Grammys in the future.