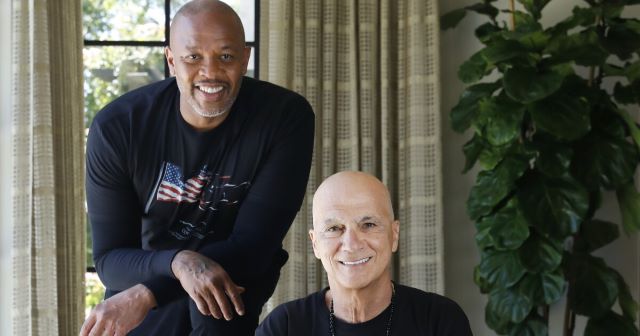 This weekend Dr. Dre, whose real name is Andre Young, proudly stood at the groundbreaking new $200 million Compton High School which was fashioned partly through his generous donation. According to a source, Dre has contributed $10 million to the project. This benevolent act was mainly because he desired to see others succeed via access to opportunities he didn’t have.

His words rang with sincerity.

“I was an artistic kid in school with no outlet for it. I knew I had something special to offer to the world, but with nothing to support my gift, schools left me feeling unseen.”

His contribution was more than a gift–it was a hand-up in the form of a new performing arts center in a new school.

This is a heart move as much as it is a philanthropic endeavor. The new school is being erected in the hip-hop super producer’s hometown but, even more so, the school will stand in the community, which serves as the birthplace of NWA. Therefore, in every manner, Young’s contribution to the construction of this high school displays a deep and abiding love for his roots.

Young’s Move Speaks Of His Integrity

The breaking of ground is more than a testament to Dre’s generosity in spirit. This weekend demonstrated what an alignment of heart and mind could bring forth. This move reflects what happens when people don’t just talk but act. Reportedly initiative results partly from a promise Dre made in 2015. In 2015 The LA Times reported Dre’s promise to pour into his community in a big way.

“I’ve been really trying to do something special for Compton and just couldn’t quite figure out what it was. Compton Mayor Aja Brown actually had this idea, and she was already in the process of working on it. So I said, ‘Boom, this is what we should do.”

So, as he promised, he donated royalties from his anticipated new album at the time to build a performing arts center for the city’s youth. That’s huge.

Young Lights Another Torch For Education

Education has been a passionate endeavor for Dre. He has openly spoken about the importance of education and what better opportunities would have meant for him. This sentiment continues to serve as a driving force.  In his words,

“I’ve always wondered how much further ahead I might have been had the resources I needed in school were available.”

Dre has proven, with these donations, his concern is genuine, and his moves are about more than lip service. His actions are authentic service.

A Lot Of Smiles To Go Around

Finally, some very deserving youth will see a promise fulfilled. As noted, the school, which has a tentative opening for 2025, plans to be a much-needed resource for a long time coming.

The new campus for the 126-year-old school will include a new academic building that can serve up to 1,800 students, with the possibility of adding 450 more and a new gym, an aquatics center, a football stadium, and track.

So, props to Dre for being the paragon of service he has been and congratulations to the youth of Compton.