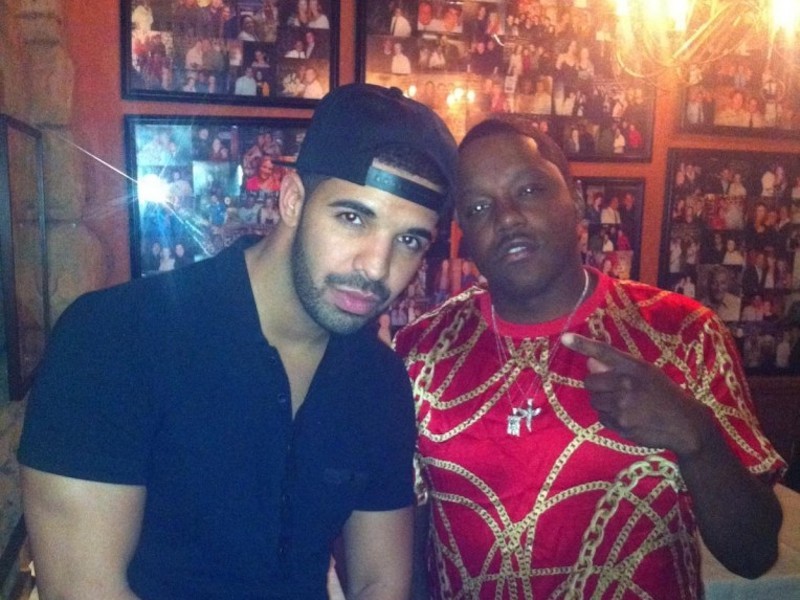 Drake and Ma$e in the studio. Image source: Vibe.

Drake’s love of the Bad Boy Records sound and aesthetic is no secret. Take a look at his recent fashionable fit!

Drake is paying homage to the iconic Bad Boy Records, a powerful figurehead in the 1990’s East Coast rap scene. This past Thursday (Jun 23), a TikTok with the “Girls Want Girls” rapper appeared. The video showed him goofing around in his large Toronto property while wearing baggy jeans and an oversized baseball jersey. The large “MA$E” sign across Drake’s chest perfectly compliments his Harlem shake.

The “Views” album artist is known for giving love to other rappers and their influences. Of course, New York is no exception. During the 2013 OVOFest, Diddy and Ma$e were brought out as special guests. In addition, Drake specifically pointed out Ma$e as an artist he’s interested in working with.

“Anything is possible, man. I told Ma$e, ‘You’re Ma$e at the end of the day, so I don’t think you should end up on anybody else’s label,'” he told MTV in a 2013 interview. “I would love to be involved. Just like I know Kanye [West] takes an interest in Ma$e as well because Ma$e is the original fly guy that made it all look extremely fun.”

Ma$e Explaining Things Blowing Up & Over

There’s clearly some mutual respect between Drake and Ma$e. In a 2012 MTV interview, the 46-year-old claimed Drake is what he would’ve been if he had never quit the rap industry. Ma$e also confirmed Drake and Kanye as the two artists he would sign with if he had a chance.

Indeed, Ma$e has a stamp in Drake’s book. Unfortuentky, Drake and Diddy’s relationship has been far rockier. In 2014, the pair got into an alleged physical fight. The story goes that both artists were partying at Miami’s LIV nightclub when Diddy suddenly approached the Toronto rapper. According to several witnesses, including Bullet Magazine editor Ray LeMoine, Diddy punched Drake several times before leaving the club with security. Although it’s a famous tale, no video footage has ever emerged from the incident.

The following year Diddy spoke with The Breakfast Club about the unexplained tension. During the interview, he disclosed that the hit composition “0 to 100 / The Catch Up” was to blame. “”0 to 100″ was initially a record that was my record, and then somehow that became just a misunderstanding because we were working with the same producers,” he expounded. “Honestly, it was a misunderstanding. Honestly, Drake is actually my favorite rapper as far as songwriting and albums. It’s been like that for a couple of years.”

The Morality Of Ghostwriting

This was an exciting enough revelation, but Diddy’s following admission would be even more surprising. He told The Breakfast Club he originally sent Drake the “0 to 100” beat for him to ghostwrite. Instead, the “More Life” record rapper used it on his own album.

“[It was] for him to ghostwrite for me. I feel like, as an artist, your allegiance is also to the record. Making the best record you can. And sometimes you can be in the room with somebody that has a better idea than you, and you’ve gotta be open to that,” Diddy explained. “Look at Whitney Houston — she didn’t really write any of her songs. I never apologized for any of that because I want the best record.”

Obviously, it appears all that is behind them. Drake and Diddy seem to have a great professional relationship or at least some level of respect for each other’s success.

Physical fights are hard to come back from, but a “Ma$e” jersey never hurt.