On July 14, the rumor mill was on fire, and the new hot topic of the conversation was Drake. There was questionable chatter circling the social media space regarding Drake’s alleged arrest in Stockholm. However, it’s no longer a rumor as Drake’s reported run-in with Swedish enforcement officers has since been confirmed.

Some Flavorful Tea On Drake

The tea was flavorful. According to news outlets, rumor had it that Swedish police picked Drake up from a nightclub in the Northern European nation. The reason behind the arrest was Marijuana possession. As you can guess, that juicy tidbit went viral. The steaminess was strong with this one. The news had fans prematurely hashtagging #FreeDrake.

Me looking for the officer that arrested Drake in Sweden! Free drake pic.twitter.com/CF7oN8yqAf

So, the hunt was on for confirmation. The press reportedly managed to get a statement from a spokesperson from the police department. According to a tweeter, the spokesperson gave a statement but didn’t confirm whether the artist had been arrested. Instead, they confirmed that Drake was not in custody. The tweet read,

“I cannot tell you anything about that, but I can confirm he is not in custody,”

FYI: I talked to Swedish police and they told me Drake is not currently in their custody. (That was the only info they would give)

This could have been enough to squash the rumors, but it wasn’t.

Those thirsty for tea aren’t happy unless they have confirmation from the source. According to reports, Drake didn’t immediately clear up the rumors. The lack of proof sparked fires since the press confirmed Champagnepapi’s presence in Sweden and confirmed a few of his activities.

After the inception of the rumor, Drake’s team rushed to put out the fire. According to Daily Motion, a  representative from Drake’s team reported the artist was in his hotel and hadn’t been arrested or charged. Indeed that news upset many people who were expecting something a little juicier. It was also becoming apparent there was no steam left in this tea.

While it seemed the rumor should be put to rest, today told another story. On July 17, Drake basically confirmed his run-in with Swiss law enforcement. Among the things posted to Drake’s Instagram account on Sunday, one was a document from the Swedish National Police Board, “Information For Those Suspected of a Crime and Subsequently Detained.” While this is not confirmation directly from the mouth of the performer, it’s the closest thing and highly suggestive. 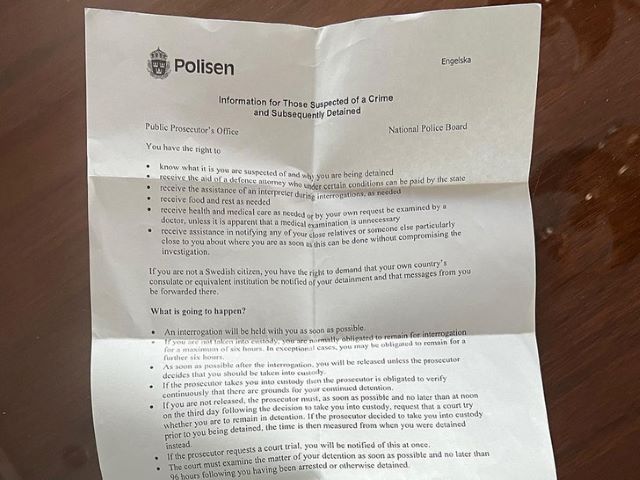 As the public knows, Drake is a free man today. Whether there are any subsequent charges or if the entertainer will have to return is unknown at the time. If there is more to follow, FM Hip Hop will be there to reveal that info. For now, everyone can relax and refocus their attention.

While today’s headlines often prove there is some truth to rumors, we still only have half the information. If there is more, it will turn up. In the interim, we do know Brittney Griner remains imprisoned, which is enough drama to keep the community sustained for now. So, hopefully, this takes some steam out of the tea being passed around.