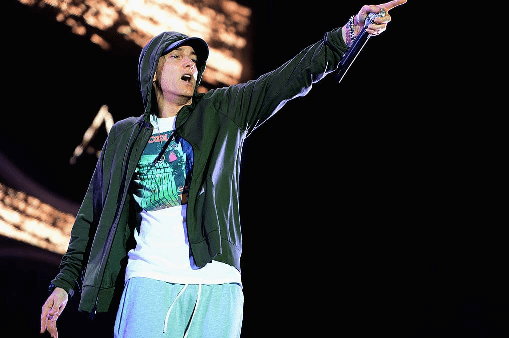 In an impressive feat of rap magic, legendary rapper Eminem breaks into the top 50 best-selling albums of 2021, despite not actually releasing an album. Despite facing stiff competition, 2005’s Curtain Call: The Hits, ranked the 49th best-selling album this year. This is according to the HITS Daily Double (HDD), which published its list yesterday (Mon, 12/27).

Of course, Eminem would be the one to randomly break into the top 50. The dude is one of the most widely recognized names in the industry. He went Diamond twice and sold a combined total of over 220 million albums.

Naturally, it would be Curtain Call, that did it. The album features some of the most iconic songs in all of rap history, including “Sing for the Moment,” “The Real Slim Shady,” and “My Name is.” It also has “Lose Yourself,” a song that was played often in my high school locker room, a slightly-less impressive stat than the fact that it has gone Platinum 5 times and is Eminem’s 6th best-selling production.

Despite now being able to legally drive in every state except New Jersey (come on Jersey), Curtain Call remains one of the most consistently bought albums of all time.

It retains its record of having the longest charting hip-hop album in history. Full stop.

Other notable albums that rocked the HDD include: The Weekend’s After Hours (10th), Doja Cat’s Planet Her (8th), and Drake‘s Certified Lover Boy (3rd). My personal favorite this year, Lil Nas X’s Montero, came in at 24th after selling 960,000 units.

While Curtain Call didn’t manage to outshine any of those albums, it did manage to push off some big names. Conspicuously absent from the chart was Tyler the Creator’s, Call Me If You Get Lost, Nas’ King’s Disease II, and Young Thug’s Punk. Sometimes the newest just can’t compete with the Real Slim Shady.