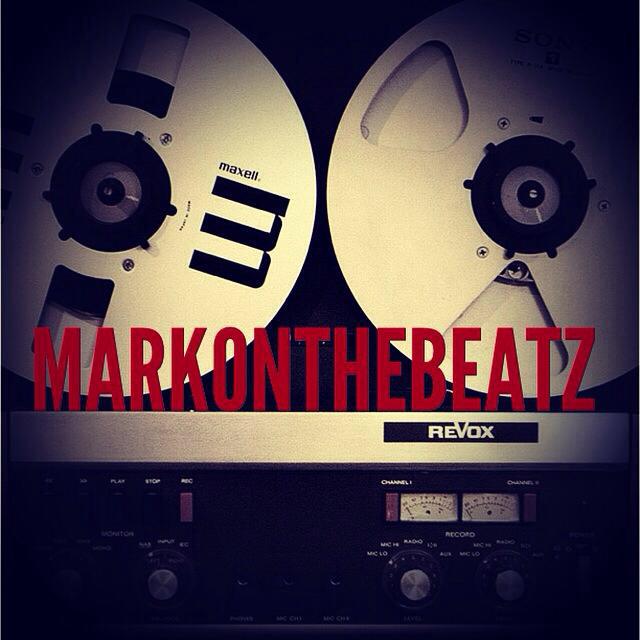 “You gotta be different. You gotta be the sore thumb, sometimes. How you gonna know what a thumb is supposed to look like if you never seen one that stuck out?” -MarkOnTheBeatz

On-the-Rise, Washington DC native, producer MarkOnTheBeatz is paving his own, righteous way into the music industry with an ‘all or nothing’ attitude. Growing up in such a monumental location certainly had its positive effect on Mark, helping molding him in to a, ‘play anything by ear’, musical-genius and musician. There is a unique culture in the original sound of music that comes from D.C. that just cannot be ignored. Everyone enjoys the sweet sound of Go-Go. So, when given the opportunity to interview with MarkOnTheBeatz, my first interest was in understanding how the culture of music in his hometown influenced the decision to pursue a career “on the beatz”. Mark exclaimed,

“Go-go, it just hits you different; you hit that and it comes right back to you. It’s that cause and effect sound. Back in 7th and 8th grade, all these cats at my school were making all this money from this music, so that kinda got me interested in the sound. It’s an art; everybody can’t make go-go records, you have to really know music, really understand music to successfully produce such a sound.

Also, where Marvin Gaye lived in D.C. is like 5 minutes from where I grew up. Actually the apartment complex where he lived, a few blocks away from me, was recently torn down and is now in the early stages of becoming a suburban neighborhood. And, I’m just like why would you tear down such a historic place in the city?”

I can only imagine growing up in a place close enough to the historic routes of, such a legend, Marvin Gaye and actually being able to travel the same roads and share similar experiences, then have it taken away like it was never paramount. Landmarks are a huge deal; this saddens me.

We spoke about the cultural advantages of DC a little while longer then moved on, further into his career. I asked,

At what point in your life did you realize that producing is something you wanted to do?

“I was getting in trouble back in DC so I traveled to North Carolina, to reside with my grandparents; and, my uncle there had a friend that did music. At the time, he had the most basic keyboard, it wasn’t even a full keyboard; but, I just picked it up one day after school and started messing around, eventually teaching myself.”

His answer made for the perfect gateway to my next question,

How did you self-train your ear for eclectic sounds that highlight intricate percussion arrangements and breakdowns with fresh, modern melodies?

“I just paid attention to sounds. And, it’s crazy because I have no schooling, at all, for music or engineering; I can’t even read music. But, I can play back anything I hear. All the keyboard, percussion, and snare sounds are all me, those are not samples. That’s how I know I have a gift from God.”

What special, ‘MarkOnTheBeatz’, effects can your listeners look forward to hearing in your music?

“My fans can always expect to hear an inspirational sound or really dope sample in my beats. One time, I made a beat and it sounded like I sampled an Erykah Badu song. Initially I didn’t, but I went back and added the sample, ‘Don’t Worry’, when people, who heard the beat, kept asking me if I’d sampled that song. It’s crazy.”

“My sound is different, not the same sounds. I feel like people can jam to my music whether they’re 20 or 50. It’s that real timeless sound. There’s peace in my sound.”

What artists inspire you most; and why?

“Umm, I get inspiration from Devin the Dude, he’s really weird, and he’s really different. My uncle used to always play him. And, I really like his song ‘Briar Patch’; it’s so realistic, when you hear the song its like ooooh who is this?

Juicy j inspires me with the beats.

OutKast! I remember my mother always playing OutKast, I remember when she first payed ‘Bombs over Baghdad’. Then, when I watched their videos, I was like who are these guys with these blonde wigs, guitars, and funky clothes with all these fans? Like, people really liked them.

How would you describe your MOTB Company and its ultimate goals?

“MOTB (Mark on The Beatz) is in the works of becoming a production company. When you come to MOTB, you’re gonna get real music. I wanna be the one stop shop. If you come to me for an old-school feel, something smooth, or something gutta, I got it for you. You want it I got it all.”

In what ways would you like to see the music industry evolve?

“I’m tired of hearing and seeing women be disrespected. A black woman is a queen; you should be calling her that, not talking to her like she’s a dog. There should be more education and acknowledgement going on in music. We should be building each other not tearing each other apart. If I got a nice car, I want my brother to have a nice car so he ain’t gotta take my nice car.”

“I always wondered why old people ride around listening to music with no words, it’s because they don’t want to hear the dumbed down lyrics, but they still like the music.”– MarkOnTheBeatz

What plans do you have on becoming the change you’d like to see, in your field?

“In my music there are words of truth that uplift and inspire. I already put my heart on the beats; so now, let’s take them gutta beats and put some conscience lyrics on ‘em. If people can make money doing wrong, I know I can make money doing right. The biggest mistake we make is not being knowledgeable about who we are.

There is a saying I’ll always remember from Bob Marley, “There’s truth out there for those who want to find it”

All the way from the East Coast, you managed to grind your way into a co-producing endeavor with Jeannie Jones, producing the ‘HBCUMixtape’. How did this working relationship come about?

“It’s crazy how I started working with Jeannie. She was actually reaching out to my artist, Ahdia, about 3 years ago. And, we linked up, we sort of already had professional history, from knowing some of the same people, so we just picked back up. It was cool because she really likes my music and what I’m trying to do; and, I needed somebody like Jeannie to help with my music. Here we are working on a mixtape”

As HBCU is set to drop in February of 2016, what can the world expect from this mixtape?

“What people can expect from the ‘HBCU Mixtape’ is music full of positive energy, inspiration, and of course your party songs. The mixtape is especially for black college students with a love for music. Actually, that’s why it’s unique, too. Artists can submit their work to me to be featured on the mixtape.”

It’s obvious your talents are spreading nationally, creating the opportunity for you to work with Los Angeles Music and Multi Media Firm, Ready Set Impact. What projects have you created with this business duo?

“Well, so far, Ready Set Impact has been getting me to do covers, to see how creative we can be, my artist and I. I’m building and recreating my professional catalog as a producer, right now with them.”

As you’re currently working with talented R&B artist, AHDIA, what do you foresee for her career?

“Ahdia is a realistic music maker. She has this certain swag to her. As Timbaland is molding his artist, Tink, into a rendition of Aaliyah with a little bit of Missy; I’m reinventing Ahdia’s image, she’s in Lauryn Hill’s bracket.

I think that she is just different. With Ahdia, the goal is to be accepted for HER; she isn’t tryna sale their bodies. She wants to give you her mind, not her body. I see her career going to the top.”

How influential is your family in your life and career?

“My grandfather hated when I would talk about wanting material things. One time he jacked me up, so hard, when he heard me talking about the cars and material things that I wanted. So, that taught me to only desire things that make me happy, from the inside out. That’s why I put my heart and soul into my music. It’s all about following your heart, without that you have nothing. And, my mom of course for introducing me to classics.

But, for the most part it’s all me out here. I have successful people all over my family, but they all favor the traditional way of doings things. And, I’m way more creative than traditional.”

What’s next for MarkOnTheBeatz; what can we expect from you as a producer?

“You can expect for me to drop the mixtape, and go on an HBCU tour. That’s what I’m striving for. The ultimate goal is to have my music motivating everyone around the globe.”

“I always wondered why older people ride around listening to music with no words, it’s because they don’t want to hear the dumbed down lyrics, but they still like the music.” – MarkOnTheBeatz

Listen: Walking On My Love- MarkontheBeatz

During the interview I was able to really find out who Mark, behind the beats, was. I mean, I was blown away, meeting intelligent black men who have a real sense of who they are is not plat formed the way it should be. Mark was awesome, and a breath of fresh air. I was even put up on game about the classic movie, Glory, starring Denzel Washington. I watched it after the interview and my life and mentality immediately was grown into a newer, fresher state. Thanks Mark.