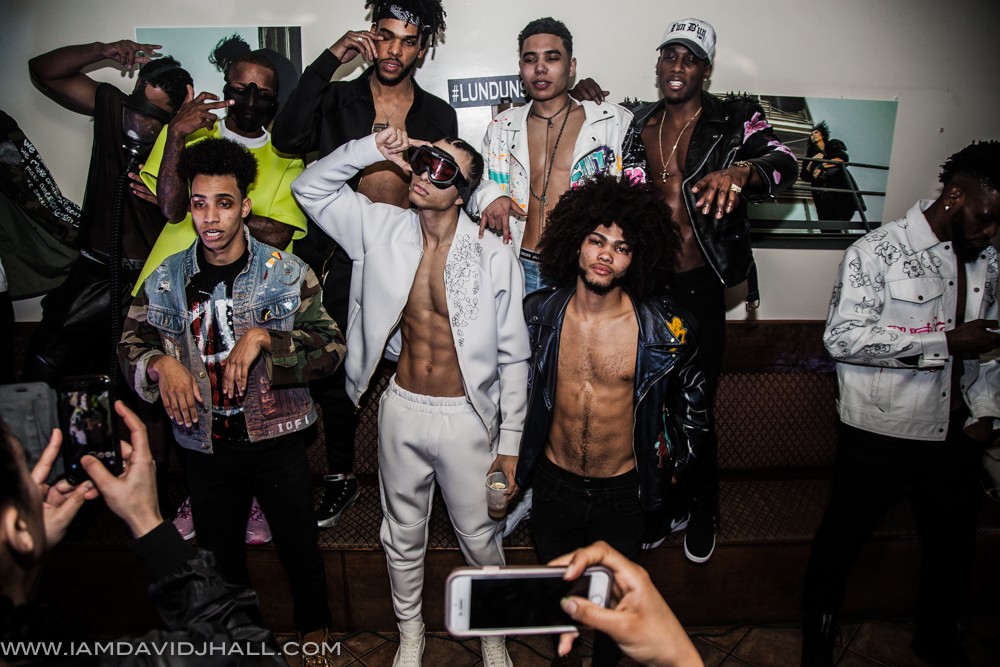 The launch was a huge success having 200 guests flowing throughout the night with tunes from DJ Showcrime (UMissedIT.Com). The night’s festivities included happy hour cocktails sponsored by Plush Vodka, ten male models adorned in the L’UN D’UN brand and entertained the crowd while cameras flashed and guests used the “L’UN D’UN’s Fashion Night Out” snapchat filter to capture each moment. It made for an interactive fashion experience.

“It’s an urban line, and I wanted to show different sides of myself,” Lunden says. “In September, you’ll get to see the more cleaner side of me. I’m a Cancer, so you get both sides: crazy and the calm. It’s unisex, anybody can wear it. Be original, be creative.”

The L’UN D’UN brand is comprised of one-of-a-kind designs that speaks to the current state of affairs and tones of reminiscing about the good times. Lunden was able to convey his thoughts through featured art by various artist across the four boroughs; which graced the leather jackets. Some of the art included an American flag covered by the Anarchy symbol, an ode to the 90’s; and messages like “Pussy Grabs Back” (in honor of Women’s Right). The line includes futuristic neoprene sweat suits, tees with a distressed American flags covered by the Anarchy symbol as well as a L’UN D’UN hat line, coining the “So Everyone’s…” tagline showcasing the saturation of various titles like Stylist, Rapper, and more.

“My inspiration? Just having fun with it,” Lunden explains. “Being able to love colors, love different textures. I love leather, I love neopreen. It’s all about stepping out the box this year.

This event was a sneak peak of what’s to come-the L’UN D’UN brand will expand with the addition of a women and children line scheduled to launch September ’17.

Watch footage of the recap here.