The news of the Robb Elementary school shooting in Uvalde, Texas this Tuesday left the entire country in mourning.

Many artists expressed their condolences to the families of the victims, as well as giving their opinions on the situation.

This Wednesday, rapper and songwriter Ice-T used the social network Twitter to show his anger towards the attacker.

“I haven’t commented on the Shooting,” stated Ice-T. “I still can’t get my head around why MFs wanna kill innocent Children.”

I haven’t commented on the Shooting because I still can’t get my head around why MFs wanna kill innocent Children… I’m lost for words. It’s SO Fd up. 💔

A User Not So Pleased With Ice-T

Although many people supported the rapper’s comment, others simply did not.

A Twitter user responded to the Ice-T’s post by making the suggestion that he is a hypocrite for talking again gun violence and still mentioning in his songs, especially for his controversial song Cop Killer. 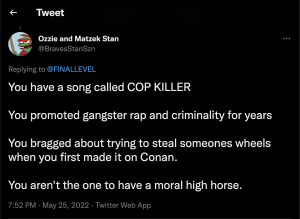 This Tweet caught the eye of the artist, who calmly replied with four simple words: “Please eat more D***s” 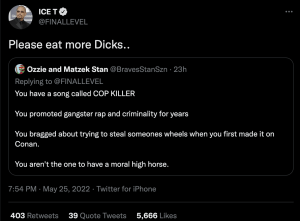 Minutes later, Ice-T responded with another Tweet in which he laughs at those people who criticize him because of his age.

I love when suckaz get mad at me the call me Old, which is true, based on their age. And Washed Up.. They might wanna Google that one. Lol

Why is Cop Killer So Polemical? 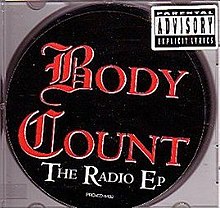 The 1992 single “Cop Killer” made by Ice-T together with his heavy metal band, Body Count is still causing surprise to every new listener. but why?

Well, such a bold song shows the listener a fantasy about revenge against police brutality in the most direct and strongest way possible.

The controversy reached such a level that CLEAT (Combined Law Enforcement Associations of Texas) and police organizations joined together in protest against the band and the banning of the track and the album from stores.

Some time later and after making a deal with Warner Bros., Ice-T agreed to remove the song from the album.

Until this day, the song remains unavailable on legal streaming platforms, except YouTube.

*The FM HipHop team offers our deepest condolences and solidarity to the parents of the victims of the massacre that occurred in Uvalde, Texas.*