Did The Hype Meet The Expectations? 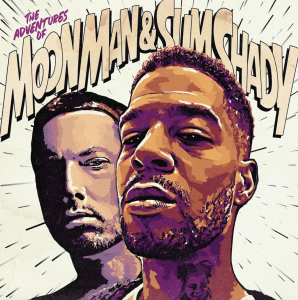 For “The Adventures of Moon Man & Slim Shady” lyric video, Eminem and Kid Cudi are both animated superhero characters, as the song title sounds like it would be a comic book title! While the two are represented as heroes in the video, Eminem and Kid Cudi show that they are heroes. The two show their heroic acts as both Kid Cudi and Eminem rap about recovery, COVID, and other issues at hand. The video presents them as leaders for many, along with the powerful messages sent within the lyrics.

In order to properly review “The Adventures of Moon Man & Slim Shady” it’s important to notice the lyrics makes the song as powerful as it is! Opening up the song with Kid Cudi’s verse, he addresses his personal journey through rehabilitation and transitioning. A few lines from his verse say, “Y’all ain’t dealing with the same boy (No). Got a little trippy, then I transitioned (Yeah)”. Later in the verse Kid Cudi also shares “All good, helped me figure out another plan. It got bad, so bad”. Kid Cudi remains to be his own hero, which is quite remarkable. Through emphasizing the importance of growth, the song becomes more appealing and relatable to others.

In Eminem’s verse, he raps about the COVID-19 pandemic and police brutality, rapping about things that are happening in our world right now! He raps about COVID saying “Half of us walking around like a zombie apocalypse. Other half are just pissed off and (Yeah). Eminem also addresses the relevance of police brutality by honoring Black Lives who were taken within his verse. “Prayers to George Floyd and Ahmaud Arbery (Yeah). How the fuck is it that so many cops are dirty? (Huh?). Stop, man, please, officer, I’m sorry. But I can’t breathe when I got you on top of me”! Eminem’s lyrics call out the system, but he’s an expert in being fair yet blunt in his raps! By pointing out real world problems, the song becomes that much more relatable.

Review of The Beats

The beat hits deep with its slow pace, letting listeners focus more on the lyrics. In terms of the review aspect, the beat is good but not foot tap worthy! If the beat was a little faster, the song would be much more catchy! The beat creates a more sad and mad vibe, but then again parts of the song do address these feelings. The tone is set well, but the beats could match the verses if it was a little faster.

This review focused on the lyrics and beats, as they are key concepts in any song in the music industry. After hearing all the gossip and assumptions about the sound surrounding the newest single “The Adventures of Moon Man & Slim Shady”, how did you guys feel after listening to it? Be sure to let us know !