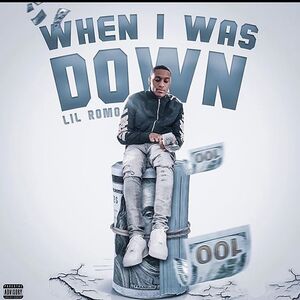 Chicago’s prominent rapper, Lil Romo, went through some obstacles to be where he today. But music, overall, became his safe haven. At just 11 years old, Romo put the pen to the pad. And his inspirations, Lil Wayne and Michael Jackson, helped Rome to cherish lyricism and artistry. Romo believes that “writing allows you to go deeper” and applauds himself for having the gift of gab. Per his press release, Romo’s unapologetic storytelling has garnered the attention of an active audience, earning him the number one spot on Chicago media outlet, What’s the Word’s “2020 Artist to Watch List.” His lyrics often see him showing love to his hometown and revealing what its like growing up in Chicago. Currently, the rapper is adding the finishing touches to his summer debut.

More recently, Lil Romo dropped a single titled “When I Was Down.” Over a trap-symphonic beat, Lil Romo delivers rhymes that hold weight. Between lyrics, the “king with a symbolic crown” raps about working hard to get where he is today. Along his journey, Romo says there were no handouts or people that were willing to help. The rapper made sure to make the proper moves to get ahead because he had to make it out of the mud, by any means. He spits: “Crazy cause it started as a dream, look what I found. Gotta make it out by any means, look at me now,” and “Gotta getaway, too much blood shared in the town.”

As the song moves forward, Romo unveils a pretty dark moment in his life. Still, Romo remains resilient. Elsewhere, he spits about his grasp on the opp’s ill motives. In return, Romo claps back with, “If it’s that then it’s just that, ain’t no need for a sound. Ever bump into the opps, we prepared to lay em down.”

The music video sees Lil Romo donning drippage, the clothing that stands out most though is his brown winter jacket. In different shots, the rapper pays homage to his hometown and day ones.

If you haven’t already, check out “When I Was Down” by Lil Romo here.