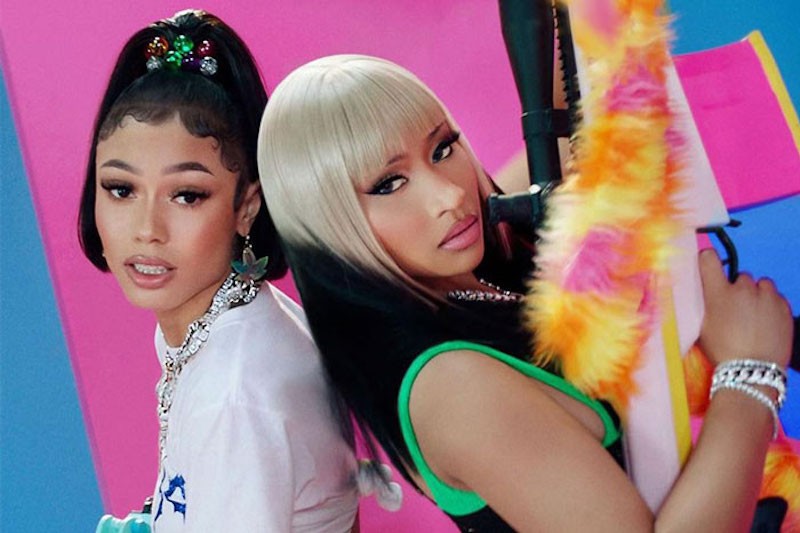 Nicki Minaj had initially left a collab with Coi Leray. However, they sorted the issues out. The collab, “Blick Blick,” will be out Friday (Mar 18).

Minaj’s problem stemmed from Leray’s father, Benzino. Back then, he revealed the collab in the works. On February 21, Benzino was in a Clubhouse room when he spilled the beans.

Leray chastised her father for ruining the surprise and causing Minaj to back out of the collab. Benzino apologized on social media for the leak.

She pulled the verse, partly because her label freaked out over the leak. However, Minaj and Leray had a private conversation. This conversation eventually led Minaj to change her mind and let the collab through.

On Monday, Minaj also did a little Q&A with her fans. One of the questions then was about “Blick Blick.” The fan heard in a radio interview that Minaj had gotten six different feature requests. They wanted to know if “Blick Blick” was one of them.

“I had gotten 6 diff feature requests & it was rlly just the song itself that made me choose,” Nicki responded. “I couldn’t get Coi verse out my head…And someone I know well confirmed she rlly writes her stuff so I respected her more.”

Yes. I had gotten 6 diff feature requests & it was rlly just the song itself that made me choose. I couldn’t get Coi verse out my head. I just loved all her choices. And someone I know well confirmed she rlly writes her stuff so I respected her more. 🎀 https://t.co/YuQdE1m3EX

Just like w|bia… loved every single choice she made on WLM. I love these unique girls. But keep in mind, I’m just a rap fan like everybody else. Even with my own verses, what I love may not be what you love. And that’s ok. 🎀

I did pull it. 🎀 but the label hit me going hard. But rlly I had a private convo w|coi & that’s what changed my mind. Not the label. I just felt bad that she was robbed of telling the world in her own way @ her own time. But that’s water under the bridge now. Good vibes all 2022 https://t.co/2aPqTzK3Lc

To Sum Up On The Leaks…

Never say never, but leaks are usually never a good thing. However, leaving the project due to them is even worse. Most of the work is already done. This only causes unhappiness and lost time.

Leakers are not trustworthy. Discover who did the leak and never trust them again. Watch them closely from now on to prevent this from happening a second time. Don’t punish the fans for it.