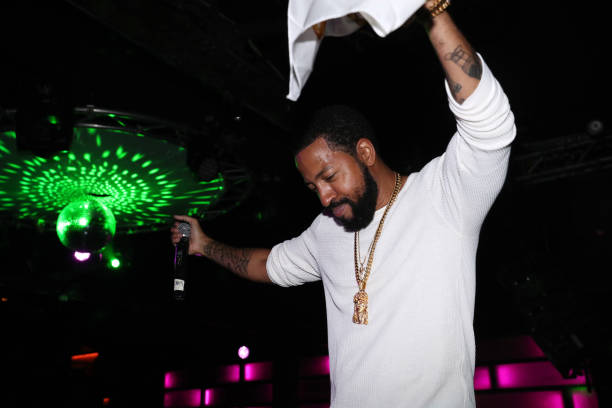 Roc Marciano has been around for a while and just dropped his joint album with The Alchemist.  Hailing from Long Island, New York, the 44-year-old still has it.  On The Elephant Man’s Bones, Roc Marciano, and The Alchemist work together to deliver a nostalgic sounding hip hop project.  In 2022, The Alchemist takes us 30 years back with his unique instrumentals and sounds.  Roc Marciano is able to deliver without much help.

He starts the album off with “Rubber Hand Grip”.  It gives me a 90s feel from the start.  From the beat Alchemist gives him to the rhyme schemes Roc spits.  It sounds like he should be rapping with Griselda.  He has a flow like Westside Gunn; interesting lyrics while rapping off beat.  Roc sounds like he is just talking.  You can tell he enjoys the finer things in life as he talks about speeding in a BMW and buying Mercedes Benz’s for his lady friends.  Oh yeah, and don’t mess with Roc, you can get it either way!

In “Daddy Kane”, Roc gets witty.  The song is a play on Big Daddy Kane, the legendary rapper and he refers to “Kane” as drugs.  Class is in session as listeners can learn a few things from Roc, such as “you ain’t a boss until you take a loss, that’s a lost leader”.  Roc Marciano is apparently a fly guy as he mentions sporting brands like Porsche.  He taps fellow New York rapper Action Bronson and makes for a perfect duo.  This beat is suitable for Bronson’s rapping style as he usually raps off beat as well.  Just like Roc, Bronson always has interesting lyrics.

On “Déjà vu”, Marci, as he calls himself throughout the album, comes to a realization about his rap skills, but also how the days are the same now.  Continuing with the nostalgic feel, on “Quantum Leap” The Alchemist specializes in this.  Marci speaks about his aficionado for nice cars and pretty women.  He even throws some old school ling to match the old school flow, calling opps “jive turkeys”.  He made the quantum leap from whipping bricks to sporting $30k Louis Vuitton luggage.

Roc starts to unveil himself on the track “The Elephant Man’s Bones”.  He admits he has wounds and has feelings, even though women treat him as if he doesn’t.  This is short lived though, as he is back to being flashy and fly on “Bubble Bath”.  In this track, he makes it clear that he is not the average man.  His clothes do not come from Lacoste or Izod.  Only the finest for Roc!  The Long Island rapper dives back into his feelings on “Liquid Coke”.  He tells listeners that all this jewelry on him still can’t heal the bruises that he has dealt with during life.  This might be the best song on the album as after spilling his soul he bounces back by putting on his Balenciaga shoes.

Marci taps Detroit rapper, Boldy James, for “Trillion Cut”.  Boldy James starts the song off and doesn’t disappoint.  Just like he went from whipping bricks to buying Louis Vuitton luggage, Marci tells us he used to wear Champion and now he’s wearing Kevlar with scars from Pablo Escobar.  Roc gets the legendary Ice-T to tell a story on “The Horns of Abraxas” while Roc spits in between.  He continues to excel with his flow on “JJ Flash” and “Zig Zag Zig”.

The Alchemist and Marci Close Strong

As the album nears a close, Roc gives us “Stigmata”.  The Alchemist provides a soothing beat.  It sounds like Roc is at an open mic night with The Alchemist playing the soft music in the background.  Roc is a poet, but I’m sure he already knows it.  I imagine the audience snapping their fingers in applause as he leaves the stage.  He follows “Stigmata” up with “Zip Guns”, a hard track, that the streets will love.  He ends the album with “Think Big”.  On the last line of the album, he said he is channeling The Notorious B.I.G., reminiscent of the song title, Think Big.  You can tell he is influenced by Biggie with his lyrical content.  This song sounds like “Stigmata”, another track Roc is just talking to us on.  He and the Alchemist lets us out of this ride gently.

All in all, this is a good album.  Roc Marciano and The Alchemist put together a project that will be played for the rest of the year.  All of hip hop has been talking about this album.  Roc Marciano isn’t new, but I’m sure he woke a lot of people up with this one.  Go listen to The Elephant Man’s Bones if you haven’t yet!