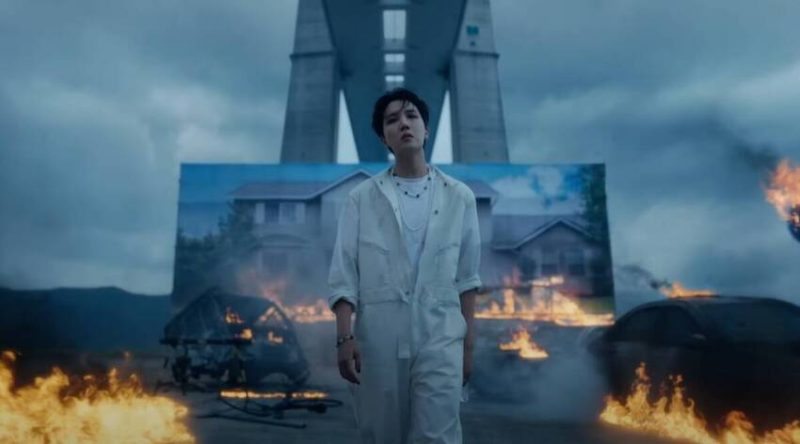 Korean rapper J-Hope gave fans a glimpse into his latest project, “Jack-In-A-Box.” The 10-track album dropped Jul 15, much to the delight of fans. The album not only lists the rapper’s accomplishments but also a record of his values and dreams. The entire album is chock-full of old-school hip-hop beats and references. In an interview with Rolling Stone, he explained that old-school hip-hop is essential because it’s what he would dance to. It’s J-Hope’s foundation as an artist.

The album starts off strong with “Pandora’s Box.” Arguably one of the best instrumentals on the album, Hope waxes poetic about the start and trajectory of his career. An early fan favorite, “= (Equal Sign),” is reminiscent of the Black Eyed Peas’ “Where Is The Love?”, particularly in the song’s hook. The song’s message is also similar, but the rapper talks about the importance of kindness despite differences instead of looking for love. The track “What If…” samples ODB’s “Shimmy Shimmy Ya,” a pleasant surprise for old-school hip-hop fans. The song unmasks the smiling rapper: what happens when he isn’t the happy-go-lucky person people need him to be? The album closes with a more hopeful, hip-hop fusion track, “Arson.” In the song, J-Hope brags about how he set the industry ablaze when he decided to make music and how he will always push himself to improve.

Hope switches flow throughout the album, which keeps the songs from melting into each other. Some tracks have a similar style of percussion and bass, but Hope’s cadence makes each track sound fresh. Each song’s lyrics parallel another song on the album, and some of them follow the theme from his 2018 EP, “Hope World.” Within the context of BTS, J-Hope, born Jung Hoseok, is the “sunshine” of the group. However, his solo songs have always been introspective and somewhat dark. With “Jack-In-The-Box,” the visuals match the lyrics and tone of the songs.

With the rising popularity of Korean pop, R&B, and rap in recent years, fans of those genres have often not seen eye-to-eye with Western hip-hop heads. Part of this is due to glaring examples of appropriation by non-black rappers. “Jack-In-A-Box” is an excellent example of what it means to appreciate a culture while incorporating your own voice. And he’s not the only rapper from BTS to do so. RM has collaborated with the artists like Warren G and Wale. He famously talked about a conversation with Warren G about what it means to be a proper rapper and hip-hop fan. Suga, also known as Agust D, has two hip-hop projects, the latter even more polished than the first.

Both Suga and Rm appeared in South Korea’s underground rap scene and received criticism from both rappers and K-pop fans. However, J-Hope had his challenges as well. He started out as a street dancer and had to learn to be a rapper after joining BTS. This project proves he made the right choice. While these three aren’t the only Korean artists to appreciate and participate in the culture (see Epik High and DPR Live), they are solid examples to follow.

The album came with accompanying visuals for “MORE” and “Arson.” You can watch “Arson,” which dropped on Jul 15, below.