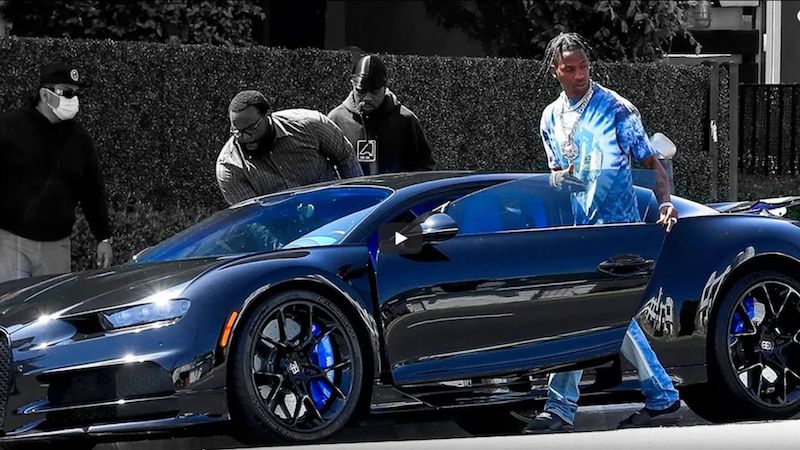 Travi$ Scott is under fire for a substantial recent purchase, but the Houston rapper is defending himself.

$5.5 million is a whole lot of money. But for the “Sicko Mode” author, this seems like a reasonable enough sum. At least, to treat himself to a brand new black Bugatti Veyron Chiron Super Sport with a hefty price tag. While a nice luxury car is impressive to most of Travi$ Scott’s fans, an attorney representing one of the victims of the Astroworld tragedy expresses criticism.

Ezra Blount is one of 10 people who tragically died during the 2021 Houston Astroworld incident. Nine-year-old Blount was senselessly trampled due to the overselling of venue tickets and poor security efforts. Now eight months and several massive lawsuits later, the family and attorney representing Ezra are speaking up. Bob Hillard is the legal representation for Ezra’s family, and he’s not happy with Travi$’s spending habits.

Hillard spoke to TMZ and called the buy “excessive.” In addition, he claims that if Scott had spent even a fraction of that money on security measures for that tragic concert, Ezra would still be alive and well. Before succumbing to his injuries, Blount firstly sued Travi$ Scott and Live Nation. Despite Travi$ Scott’s apologies and compensation offers, the Blount family and attorney clearly aren’t letting up.

Travis Scott was seen stepping out of his Bugatti Chiron in West Hollywood yesterday 🔥 pic.twitter.com/DsjiWNnDcf

Despite the fierce criticism, Travi$ Scott isn’t afraid to defend himself against Astroworld victim’s attorneys. A representative for Travi$ reached out to TMZ this weekend (Jun 26) to respond to Hillard. Apparently, Travi$ Scott purchased the Bugatti in 2020. This would be before the Astroworld disaster even occurred. The document states, “This latest attempt to exploit Astroworld victims and gaslight the media and the public is a new low. The car referenced was purchased way back in 2020 (well before the tragic events at Astroworld) and covered widely by the media — including TMZ — at that time.”

The rep continues, “Misrepresenting a two-year-old car purchase to make an unprovoked and unjustified attack on Travi$ Scott is nothing more than another desperate publicity stunt to try to falsely blame Travi$ and intentionally manipulate public opinion, which won’t work.”