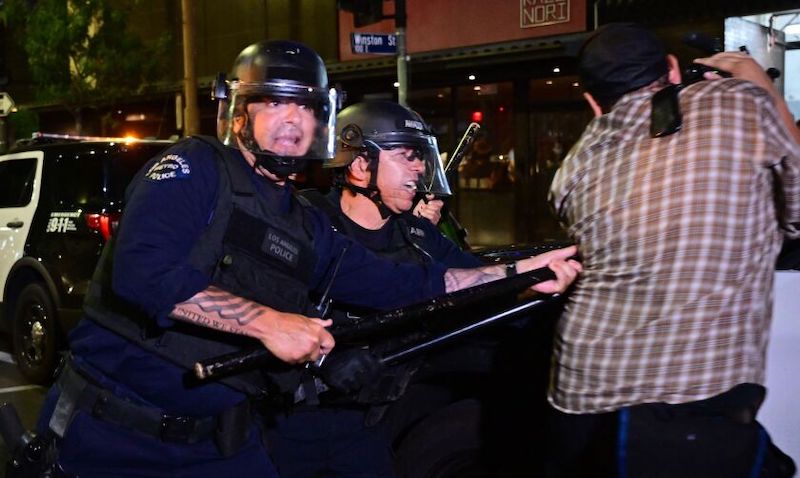 Today more than a few journalists are speaking out about their experience with poor and illegal treatment from officers of law and order. And it brings to question what actions occur about the police’s consistent overreach or denial of legal protections.

Another angle showing multiple officers pushing me to the ground at tonight’s abortion rights protest downtown even as I complied with police orders https://t.co/K41WNsOx7M

Sadly, journalists and other press members are finding that despite measures to expand protections, there is little follow-through. This was on full display Friday evening. One journalist had a particularly alarming exchange with an officer that left her bruised and battered.

According to Tina-Desiree Berg, she was in the process of filming when she became a victim of an unwarranted assault. As the journalist reported to a source, she was on the sidewalk filming the arrest of an abortion rights protester in downtown Los Angeles on Friday night when a police officer hit her on the side of the head. Even more alarming is more than one officer struck the professional.

Issues Relevant to All Press

More disconcerting, Berg was not the only one to experience such behavior. It is reported that what Berg experienced was echoed by many journalists. According to MSN,

“Times reporters submitted proof of journalists being pushed, struck with batons, forced out of areas where they had a right to observe police activity, and blocked from entering other areas where police and protesters were clashing, and arrests were being made.

LAPD’s behavior with the press is a travesty on so many levels. But, primarily, it sets a dangerous precedent.

Fundamentally the First Amendment protects the rights of a free press, free speech, and peaceful assembly. Yet, the press has had a contentious history regarding those protections. And the issues which have arisen have led to widespread talks of change. And some of those talks led to purported action. However, Friday night’s exchanges prove so much more must be done. Words are not enough.

Knowing is Not Enough

Many Journalists who tried to document the events of the protest Friday were also aware of the expansion of protections. It is public knowledge, as recorded,

“Gov. Gavin Newsom signed a law in part in response to former incidents expanding rights of journalists covering protests, and the LAPD introduced a new policy making it clear that journalists have a right to cover protests and enter areas that police have blocked off.”

So, there is no excuse for lapses in professionalism in upholding the law.

Today several questions bear response. And clearly, there is a need for change and reformation. It is yet to be seen when or if that will happen, but it is long overdue. And this is only the beginning of a much larger issue. Respectfully FM Hip Hop’ will maintain the position of providing news coverage as it breaks.