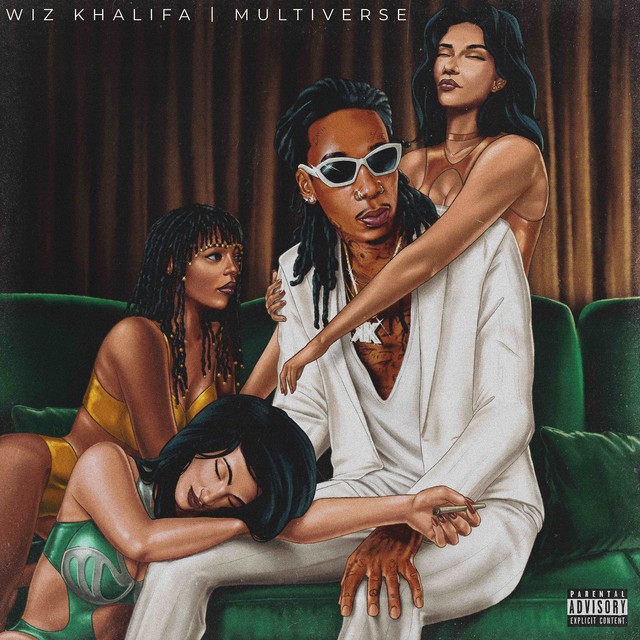 Wiz Khalifa just dropped Multiverse last week.  Wiz has been a staple in hip hop since the early 2010s and always delivers good music.  We took time to listen to his new album and here’s what we thought of it.

Multiverse starts off with “Big Daddy Wiz”.  He sets the tempo with a old school feel, but with a new kick.  It will definitely get you moving!  He keeps the tempo going with “MVP”.  Just like “Big Daddy Wiz”, it’s a feel-good song that allows you to enjoy yourself.  He sounds like is having fun over this futuristic type of sound.  Could this be the type of sound one would hear in the multiverse?  Wiz is thinking in the future with this album.   From these two songs, if you don’t know Wiz, you can learn a few things:  He likes to have fun, enjoys drinking, and wants to be surrounded by beautiful women.

In his next few songs, he takes a turn.  We get to hear Wiz discuss the matters of his heart.  In “Memory Lane”, he reflects on a woman that he shared time with.  This is definitely a song that caters to the ladies as well as the men.  Everyone has that someone they go down memory lane with.  It sounds like he is not over this woman.

The same feeling continues on “1000 Women”.  The title can confuse you because one would assume he is talking about wanting 1,000 women, but he isn’t.  He used to want 1,000 women, now he only wants one.  Wonder if this is the same woman he is talking about on “Memory Lane”?  On “Like You”, he continues the trend of talking about this one girl.  He claims he’s seen a lot of girls around the world, but none are like this specific girl.  Wiz sure sounds like he has found love.

Wiz Khalifa is not afraid to sing on the microphone.  He actually does it a couple of times throughout the album.  On “Something Real”, he showcases his melodies.  He is searching for something real, whether it be with someone else or within himself.  Also, on “We Don’t Go Out To Nightclubs Anymore/Candlelight Girl”, he is singing.  As it is mostly an instrumental, Wiz comes in and out to sing a few lines.  He does this on “Mirror Love (Groove 2)” as well.  On the second to last song, he drops off one more ballad for us with “Nobody Knows”.  Wiz’s singing will catch you ear.

Wiz has always been known to party.  From smoking big planes to drinking bottles of Bombay, Wiz knows how to have a good time.  The lead single, “Bad Ass Bitches”, is what Wiz usually is about.  The single is a twist on the earlier songs catered to women, he doesn’t just want one.  Here, Wiz wants all the fine women around him!  On “Iced out Necklace”, he brings more of the fun as -I can hear this one being played in the club.  It’s a hard song with a hard beat that will make you nod your head.  “Keys” may be the best song on this album!  Wiz always sounds like he is having fun when he raps.  A good follow up to “Iced Out Necklace” as this can be played in the club too.

Overall, this is a solid project by Wiz Khalifa.  He gives us different sounds and then what we usually expect from him.  Take the time to listen to Multiverse if you haven’t had the chance.