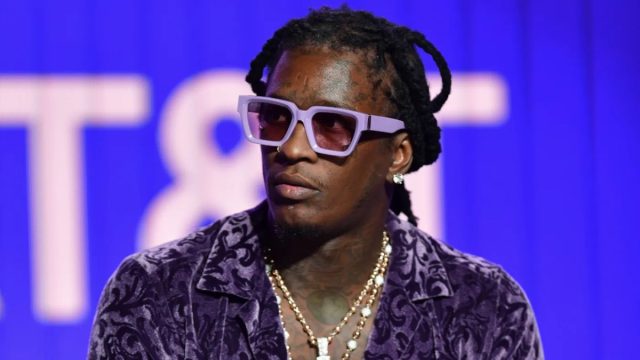 In his second time speaking out since his arrest, Young Thug dropped a freestyle from his jail cell. The clip has since been trending, making the rounds online. In the video, Thug spits the freestyle to his nephew and YSL signee BSlime.

Young Thug’s tone in the freestyle is introspective, reflecting on his current situation and what he misses from the outside. However, the bars also indicate that though his spirits are high, he understands what is at stake.

The freestyle comes just days after Gunna, who is also in jail on the same charges, released a letter on his 29th birthday. In the letter, Gunna proclaimed, “For now, I don’t have my freedom. But I am innocent. I am being falsely accused and will never stop fighting to clear my name!”. The letter also addressed the “Protect Black Art” petition, which seeks to protect artists from having their lyrics used against them in court.

The latest on Young Thug’s case

Young Thug, Gunna, and 26 others still remain indicted on Georgia RICO charges. Slime was recently denied bond by a Fulton County court, with prosecutors arguing that he still represents a threat to the community.

The prosecution also attempted to have Thug’s attorney, Brian Steel, removed from the case. They raised concerns that Steel may attempt to deter potential witnesses from testifying against his client. However, the judge allowed Steel to remain on the case.

The prosecution’s case relies heavily on song lyrics and social media posts. Dozens of examples are listed in the indictment, including photos of defendants in YSL jewelry. Lyrics from songs such as “Slime Sh*t” and Gunna’s “Fox 5” are also referenced.

Young Thug broadcasted an audio message from jail to Hot97’s Summer Jam in New Jersey on Sunday. In the message, he encouraged people to sign the “Protect Black Art” petition.

“You know, this isn’t just about me or YSL. I always use my music as a form of artistic expression, and now I see that Black artists and rappers don’t have that freedom,” he said in the message.