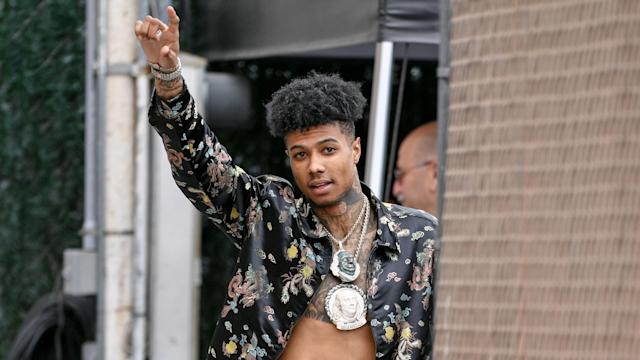 LA rapper Blueface has had a very public and hectic relationship with Chrisean Rock that might be over for good.

Messy isn’t even the word for this controversial pair.  From family brawls to stolen cars, Blueface and Chrisean Rock have been through a lot. Fans noticed recently that things seemed to be on a downward spiral again when The ‘Bleed It’ rapper allegedly blocked/unfollowed Rock on Instagram. In an unusual move by the former athlete, Chrisean was spotted with Fivio Foreign at the club without her boyfriend present. It’s presumed this led to the following internet fallout.

The 25-year-old hopped on his Instagram story this weekend to clarify his feelings on Chrisean. “I didn’t block her. Me and Rock, we vibe. She’s not reliable enough-| mean we had an agreement and she didn’t hold up her end of the agreement, simple as that.” He explained.

“That’s all that is. It’s not a breakup. We still vibing. We still connecting. We still ahh ahh ahh. She’s just not reliable enough for me. That’s it. That’s all it is. t’s important to have a person that you can depend on.” He seemingly confirmed the couple isn’t broken up in a traditional sense, but he doesn’t see Rock as trustworthy. As far as the aforementioned “agreement” Blueface never detailed what it was exactly. In a later video posted to his story, Blueface gave more insight into why Chrisean is in the dog house.

“Since y’all want to be so f**king nosey, I told Rock,” he began. “You can’t be coming in and out of my house any time of day and any time of night. I got an HOA, I got neighbors. I got real responsibilities that I’m not always there to take care of.”

All is fair in love and war

Of course, the Baddies South star responded similarly. Chrisean posted on her story to tell her side and urge Blueface to be more honest.

“U putting on a front to hurt me [more] .. I really don’t know what’s the point to act like u don’t really love me” she typed. “Whatever it is u doing it won’t last long. Ima just keep going n keep getting busy n pray that the dark cloud go away fr.”

The last big blowout involving  Rock and Blueface occurred last month. You may remember a video surfaced of Rock, Blueface’s mother. and sister fighting outside the rappers LA home. The viral video drew heavy criticism from those who didn’t understand how a toxic relationship could come before family. In an attempt to explain the attack, Blueface asked Rock on his IG story why she got in the fight. According to the Baltimore artist, she had no choice.

Wack 100 shares a video of the aftermath of the fight involving Blueface ‘s sister , mother , the sister boyfriend and Chrisean Rock. pic.twitter.com/4sgzbtqN2A

In February, Rock was arrested after attempting to steal her boyfriends G Wagon and drive it to her hometown of Baltimore, Maryland. According to arrest records, she had crack cocaine in her possession at the time. In a video posted to the ‘Thotiana’ rappers story, he calls Rock a “dumbass” and a “thief”. He also confirms reporting the vehicle as stolen, likely leading to Rock’s arrest.

Clearly, this couple has gone through some tough trials. Still, this most recent bump in the road obviously has Chrisean hurt.

She continued to address Blueface,

“The fact u saying all dat stuff to look a certain way just shows ppl what [an] immature guy you are never knew you being scared to show wassup is crazy to me. You acting like u not scared to lose me is funny [too]”

In another post she accuses her ex of acting indifferent because he can’t handle someone attractive. “Blueface can’t deal with the fact that he’s dealing with someone everyone [attracted] to” she claimed. Chrisean ended her rant with a declaration of love, despite the harsh words exchanged.

In addition to the long message, Rock also posted a broken heart emoji and a reply to a tweet. The tweet from Blueface reads: “thought I had me one” with a caption from Chrisean just underneath. “Smh u did have one but u just trynna find reasons to break up w her for no reason weirdo” she responded.

If social media is any indicator, it’s doubtful this is really the end for this duo. After all, they’ve certainly survived worse than some late-night doorbell rings.