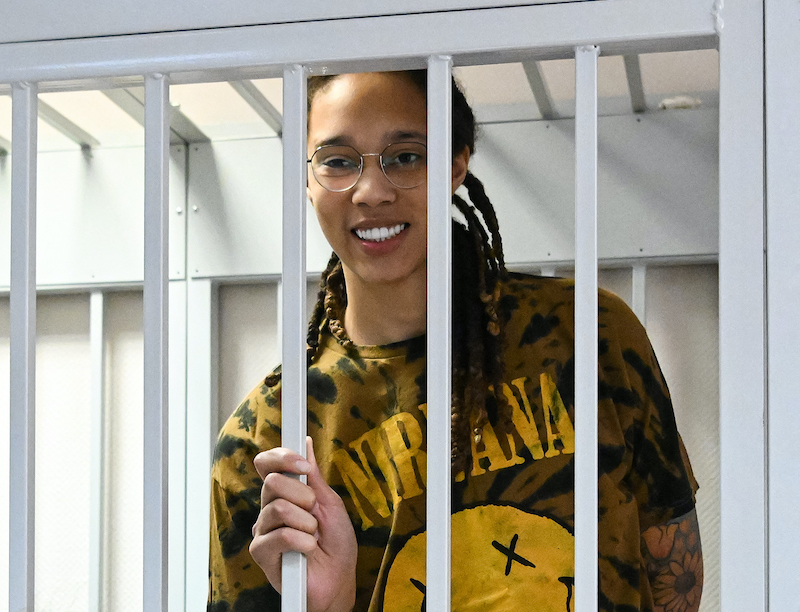 Brittney Griner is now an inmate at the IK-2 penal colony in Russia after a rough legal battle that unfortunately left her in the dust.

What began as a small vial of hash oil in her luggage has snowballed into severe federal charges with the Russian government. In February, the Russian police detained Griner after Sheremetyevo Airport security found a vape cartridge containing cannabis oil in Griner’s suitcase.

The case immediately drew public outrage from Griner’s family fans and fellow celebs who demanded her release. The 32-year-old originally traveled to the European country to play for the UMMC Ekaterinburg club team during the WNBA off-season.

U.S. basketball star Brittney Griner has been taken to Female Penal Colony IK-2 in Yavas, about 300 miles southeast of Moscow in the Russian region of Mordovia where she will remain for the rest of her sentence. pic.twitter.com/awNwulcmkr

As the months marched on and Griner remained in Russian custody, the protest grew wider and wider. Eventually, President Joe Biden had to act. Despite a long series of negotiations, including a proposal for a prisoner trade, Russian authorities refused to budge.

The case comes at an awful time for Britney. Due to the United States’ involvement in the Ukrainian war, tensions with Vladimir Putin have been high. Pair this with Griner’s identity as a black lesbian in a highly anti-LGBT nation, and you have a tough fight.

The Phoenix player’s trial began in July. Griner pled guilty to smuggling charges and begged leniency from the court. According to Griner, the vape cartridge mistakenly went into her luggage, and her crime was unintentional.

The court sentenced Brittney Griner to nine years of imprisonment in Russia on Aug 4. She also faced a fine of $16,700.

President Biden has publicly denounced the sentencing and alluded to a possible appeal. But for now, Griner remains on Russian soil.

Fast forward to the present day, Griner is just beginning her stay at the IK-2 penal colony. According to experts on the Russian prison system, Griner’s world isn’t done crashing down.

“Her life will be very difficult,” Marina Alexandrova explained. Alexandrova is a University of Texas professor specializing in the history of Russian penal systems. “It will be terrible.”

For the average IK-2 inmate, mornings start bright and early at the crack of dawn. After a small meal, they travel into Mordovia to engage in rigorous forced labor. They work until sundown with little breaks and retire in overcrowded bunks. For anyone, this is a nightmare. For Britney Griner, it’s also her new reality.

“Brittney is doing as well as could be expected and trying to stay strong as she adapts to a new environment,” Griner’s lawyers stated in a recent press release. “Considering that this is a very challenging period for her, there will be no further comments from us.”

Brittney Griner has been imprisoned in Russia for 284 days.

It’s been 24 days since she was sent to a forced labor camp. Working 17 hours a day in slave-like conditions

One public figure, also with firsthand experience of Mordovia, is Nadezhda Tolokonnikova of the Rock band Pussy Riot. The punk artist went to prison in 2013 on charges of hooliganism and, subsequently, suffered the living conditions. In an open letter, Tollkonnikova cited overworking, beatings, and poor hygiene as the most significant challenges. “Inmates can be punished if their uniform is not buttoned down correctly,” she stated.

Sadly for Britney Griner, progress in securing her release is still lacking. She’ll have to mentally and physically prepare for the toll Russian prison will take.