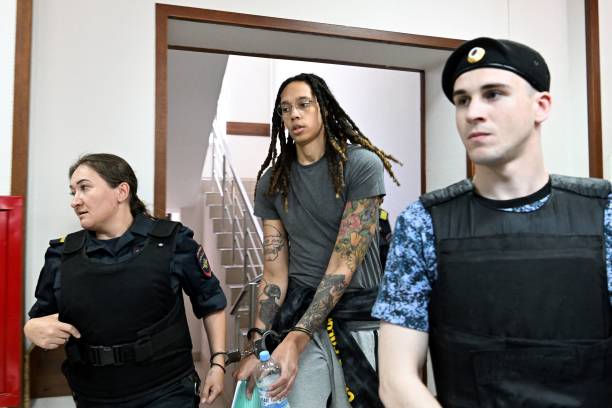 WNBA star Britney Griner has been sentenced to nine years in prison.  She was arrested on February 17th for being in possession of cannabis.  Griner expected the Russian court to hand out a lengthy sentence.  On July 7th, she pleaded guilty under Russian law.  Supposedly, there were talks involved with Russia and the United States regarding a prisoner swap.  There was a proposed trade of Russian arms dealer Viktor Bout for Griner and American citizen Paul Whelan.  But those talks have stopped.

Also, along with the nine-year sentence, Judge Anna Sotnikova fined Griner 1 million rubles, which is $16,700.  The only good thing about this is that the time she has been serving since February will count towards the nine years.  Under the charges the WNBA All-Star faced, she was looking at a maximum of 10 years.  Prosecutors suggested she serve at least 9 ½ years.  Griner’s defense team plans to appeal the decision.

Britney Griner was caught with .7 grams of canibus oil in Russia and got sentenced to 9.5 years in prison.

In Russia, up to 6 grams of weed is punishable by detention of 15 days.

Politics was and has always been at the forefront of this.
pic.twitter.com/zxWU4eQDJf

According to Russian law, they have 10 days to make an appeal.  Their reason for appealing stems from the court dismissing their client’s guilty plea as well as the evidence they acquired.  Her team plans to use any tactic they can to bring her home, including asking for a pardon from Russian President Vladimir Putin.  According to her team, Britney is having a hard time dealing with the outcome.  A lot of stress, but more silence than anything.  After Judge Sotnikova announced her decision, Griner was emotionless and managed to let out one sentence before leaving the courtroom. “I love my family.”

United States President Joe Biden responded to the verdict that was made today.  He remains that Britney Griner has been “wrongfully detained” and she should be released.  He calls her sentence “unacceptable”.  Griner’s agent, Lindsay Colas, has supported Biden the whole way as he has made efforts to get her client home.  Colas adds that her client is a “political pawn” by the Russian courts.  Many other people have responded to the verdict as well.

WNBA commissioner Cathy Engelbert and NBA commissioner Adam Silver both describe the sentence as “unjustified and unfortunate”.  The WNBA players’ association feels it’s time to bring Griner home.  The team she plays for, the Phoenix Mercury, shared a statement on social media stating that the franchise has been heartbroken throughout this whole situation.  Griner knows she made a mistake and did not mean to break the law.  She apologized to the city of Ekaterinburg, where she plays for their club, her teammates, fans, and the WNBA.