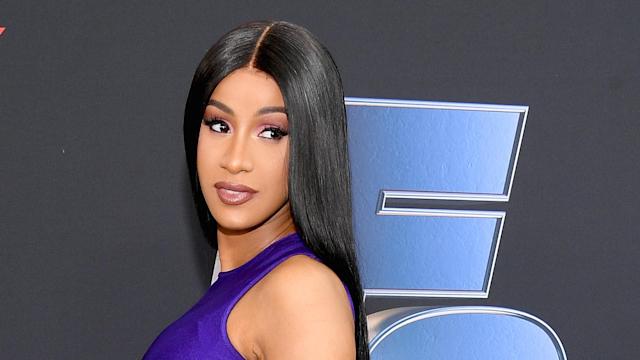 Cardi B spilled and Angie Martinez sipped on a radio interview with the two New York natives. Find out what to expect from Cardi in 2022.

Hot Shit’ by Cardi B featuring Lil Durk and Kanye West is fresh on the music scene.. This kicks off a long series of promo for the Bronx MC. Cardi’s last album Invasion of Privacy saw career-changing success with all 13 tracks going platinum and 2022 being its fourth consecutive year on the Billboard Top 200. Now that so much time has passed and tons more female rappers have entered the game, all eyes are on Cardi to follow up her magnum opus.

The ‘Up’ rapper gave Angie some hints on her upcoming album and some additional projects. The 40-minute interview touched on both the music and the personal.

Angie and Cardi began with discussing her latest single ‘Hot Shit’. Surprisingly, Cardi revealed that dropping new music still makes her nervous. “I just get emotional, I start tearing out of nowhere…I’m scared!” She exclaimed jokingly. Cardi is known for taking long gaps in between projects. Aside from ‘Shake It’ featuring Kay Flock, Cardi hasn’t dropped a single since ‘Up’ over a year ago.

“I should just stop waiting so long to drop records, so when I drop again I won’t be as nervous,” she pondered.

Putting new music off is a habit the 29-year-old shares with her husband Offset. It’s been over three years since his solo album Father of 4. Perhaps that’s why he’s so good at managing his spouse’s nerves.

“I just keep thinking who can I put in this song cause I just feel like this beat is not for everybody” Cardi expounded on her newest song. In one interesting observation, she took note of the repetitiveness of male rap features.

Well, it goes without saying, Durk and Kanye are certainly an unexpected combo. The two Chicago rappers worked together on an introspective Donda last year, but never on a rough beat a la ‘Hot Shit’. Produced by Tay Keith and BanBwoi, This marks Cardi’s first-ever track with both artists. She’s proudly showing she’s not afraid to take risks this album rollout.

Where is the song of the summer?

Fans wondering about a music video for ‘Hot Shit’ can keep calm. Cardi confirmed visuals are on the way. Following in line with the features, Cardi decided to step out of her comfort zone with the video. “I did something that I never did before, and that I’m always against,” she began. “CGI. I’m really against that, I never really did it, never really liked it. But I was like you know what lemme try something different.” According to Cardi, the video was filmed back in spring. However, the CGI animation is incomplete with no official release date in sight.

Another project still without an official drop date is Cardi’s sophomore album. The follow-up to Invasion of Privacy has been teased for years by the former LHH star. While clues have been extremely limited, Cardi did confirm during an appearance on Playboy’s Centerfold platform that both ‘Up’ and ‘WAP’ will make the tracklist. There always seems to be a reason for Cardi not to release her album, but her biggest setback at the moment is a lack of inspiration.

“Right now I’m so disconnected with the music. It’s like, I go to the strip club and my money is still here. Because I don’t even wanna throw money to the song that’s playing right now, cause everything sounds so slow, nothing is hyping me up.” Cardi explained to Angie. This is a sentiment largely shared by music fans on social media . Particularly, the lack of a “song of the summer” has been noted by both the public and the Bronx rapper.

there’s still no song of the summer 😖

so theres no song of the summer?

Idk, what’s wrong with music this year but we have NO song of the summer… like there is no BANGER. There are some good tracks but no truly infectious lead singles have been released…

idk about yall but this summer is boring..

The rappers vs the fans

A part of this issue is the internet, at least that’s what Cardi believes. A key portion of this interview was a perspective Cardi offered on how internet culture impacts the success of a song. Instead of hearing a track and forming an opinion for themselves, social media users often rely on the first impressions of others for song reviews. This leads to many potential listeners being turned off before they’ve ever given a song a chance.

This trend could be seen recently with Drake’s Honestly, Nevermind. Upon its release, it was quickly dubbed as a “bad album” on the basis of its unusual house beats and vocals. Obviously, it’s fine not to like an artist’s work. But how many Twitter users do you think heard all 14 tracks before disliking it the same morning it dropped?

“People are not giving things a chance. How people was judging fucking drake album, that shit was out for two minutes!!”

Truly, the listening public is making up its mind faster and harsher than ever. It’s no coincidence the Billboard charts are currently so stagnant, with quarantine-era tracks like ‘Levitating’ and ‘Stay’  still hanging on to the top 20. This makes for a difficult time to land a hit song, and Cardi recognizes that.

A businesswoman in and out the home

A sophomore album isn’t the only thing Bardi Gang has to be excited about. “After I do this album, I want to do a mixtape with my husband.” Cardi revealed. Offset and Cardi B have rapped together several times. once on 2019’s ‘Clout’, and before then on Quality Control: Control the Streets Vol 1. Even before Cardi’s time in the mainstream spotlight, the couple worked together on Gangsta Bitch Music Vol 2. Aside from their personal connection, it’s clear why Cardi gravitates to her husband musically.

The focus then shifted to Cardi’s business ventures, of which there are many. From alcoholic whip cream to Reeboks, to Playboy, this rapper wears many hats. As creative director of Playboy, the ‘Like It’ artist has input on the aesthetic and content of the magazine. Tons of celebs take secondary roles in companies just for the bragging rights or extra points on their resume, but Cardi has shown some real passion and even realer results. Since making her creative director, Playboy has seen a revenue increase of 63% with a total growth of  $69.4 million. Evidently, this job position is permanent.

While discussing her affairs with Playboy, the wife and mother teased a brand new platform for the company. Centerfold is meant to serve as a competitor to OnlyFans. During the Covid-19 quarantine, OnlyFans blew up as a vessel for models, singers, rappers, and sex workers alike to make easy money providing exclusive content. Not much info was given on Centerfold but it is confirmed Jordyn Woods will serve as an ambassador.

Cardi topped the interview off with a segment focusing on fellow New Yorker and female rap pioneer Lil Kim. As Angie and Cardi spoke on celebs they believe get too much hate, Lil Kim’s name popped up. Immediately, Cardi showed respect. “I really want to put her on a song on my album and I can’t wait” Cardi divulged. “She has done it all. She’s really done it all” in a compelling moment, Cardi tied this topic back to her comments earlier on the internet’s influence on the music industry. In recent years, Lil Kim has been the victim of mass online bullying mainly concerning her appearance. Although rap fans still maintain a level of respect for the Brooklyn legend, her rep amongst younger listeners has been damaged by memes and petty jokes.

“Cause you wasn’t there. You just don’t understand the certain impacts and certain shit.”

As far as future plans go, it’s more of the same for Cardi B. She’ll be making her rounds this festival season, performing for her fans, and getting back into the swing of things. Following the birth of her son Wave and the COVID concert restrictions lifting, Cardi’s plate is about to be extremely full. But judging from this jam-packed interview, this Bronx girl is used to being busy.