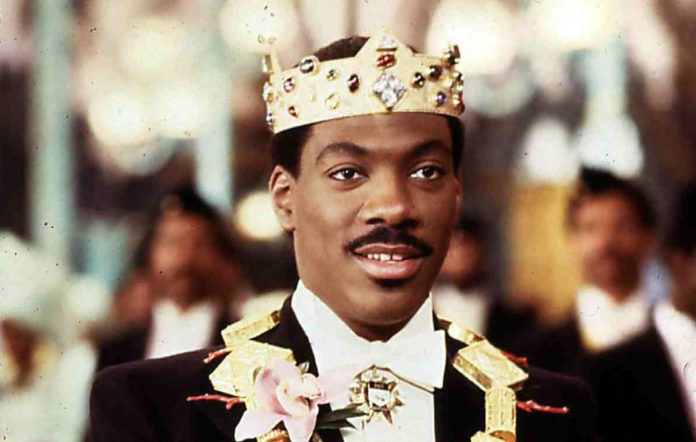 The highly-anticipated sequel Coming To America could be released just before Christmas on Amazon Prime.

Variety reports that Amazon Prime is trying to pick up the rights to Coming to America 2, starring Eddie Murphy and Arsenio Hall, and will reportedly release it on December 18. Christmas is coming early if this takes place.

Paramount Pictures is in the process of selling the movie,  Coming 2 America, for around $125 million to Amazon. Paramount reportedly believes it won’t have any box theater success due to the ongoing Corona-virus pandemic.

The same fate was handed to the live-action remake of Disney’s Mulan, which was meant to debut in theaters around the world until the Disney corporation decided it would be better to release it on their streaming service.

The original Coming to America was a cult classic when it  was released in theaters in 1988.

It told the story Prince Akeem (Murphy), who left Africa for New York on a journey to find true love after rejecting an arranged marriage. Once in the US, he meets, and falls in love with, Lisa (played by Shari Headley).

Director of Coming 2 America Craig Brewer told Entertainment Weekly they very aware that audiences will have very high expectations of the sequel because the original was so well received.

“There’s this moment that I always go back to: when we were screening Dolemite Is My Name, I worked on Empire a little bit, so I had some of the writers come and take a look at the movie,” Brewer said back in December.

“They were all in the back row of the screening room, and Eddie and Arsenio walked in and sat down in the second row, just like old friends do. And I could see everybody in the back’s eyes getting big and pointing down to both of them.”

Murphy has also praised the team for making a brilliant film.

While speaking with Antonio Banderas for Variety’s Actors on Actors series, he said: “I’m just over the moon with how it’s turned out.” He told his Shrek co-star that the movie’s creators managed to find a unique way to update Prince Akeem’s story. Further stating,. “We figured out a way to connect it, and that’s what we’re doing now.”

As long as the deal between Amazon Studios and Paramount goes through we can get excited for the big December 18 release date.

Related Articles: Your Next Halloween Watch: Movie Recs from a Film Kid- Ready Or Not