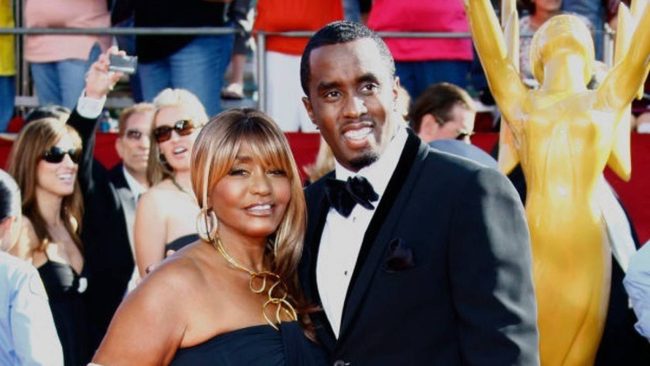 Diddy's with her mom Janice Combs. Image via Getty Image

Diddy’s mom aka Janice Combs made an appearance on Instagram lately. Mothers always fight for their children and don’t care about being judged for it. Especially when rappers’ moms get into it, you know there’s gotta be a fire in the hole. She apparently voiced against one of the industry’s hip-hop artists Ma$e. After all, what can the rammy be about?

As smart as she is Janice Combs kept an eye out and swung to action. Saturday 23rd July 2022, Combs did a Live Video on Instagram, making a shoutout to the following respected artists: LOX, biggie, and Ma$e when her mom was hooked up on hearing the last one on the list  and interrupted her son, saying right to the camera: “Don’t mess with my son.” Combs then replied: “Yeah we still love Ma$e, always gonna be love.'” Deep down we know his mother doesn’t approve of any of this.

The fracas between the 2 rappers

It’s no new news that the ‘Bad Boy Records Label‘ singer and its founder Combs have been on bad terms for quite a long time now. However,  the two were once best friends and released several record songs along in the 90s. Their first feud started over publishing but now, more issues are adding to the feud. Considering the 46-year-old rapper pointed his fingers at Combs for getting involved in shady business practices that tricked him out of money. He was not the only one to face financial troubles on the record label. Several artists present brought the matter forward. Despite the two not speaking, Ma$e still tends to talk about the feud in interviews. Moreover, he said how he felt cheated and had not received fair treatment due to Combs.

He also threw shades on Combs on releasing his single entitled “ The Oracle 2: The Liberation Of Mason Betha,” blaming the latter for exploiting Biggie Small’s death. He rapped:

“I’m not hating on your Billi worth/Right now, I’m only saying what you really work/You ain’t no architect/You just a n-gga who know how to market death.”

“@diddy I heard your #Grammy speech about how u are now for the artist and about how the artist must take back control, so I will be the first to take that initiative. Also, before we ask of other ethnicities to do us right we should do us as black people better. Especially the creators. I heard u loud and clear when u said that u are now for the artist and to that my response is if u want to see change you can make a change today by starting with yourself.”

Want more news on Combs? Check out his lifetime achievement