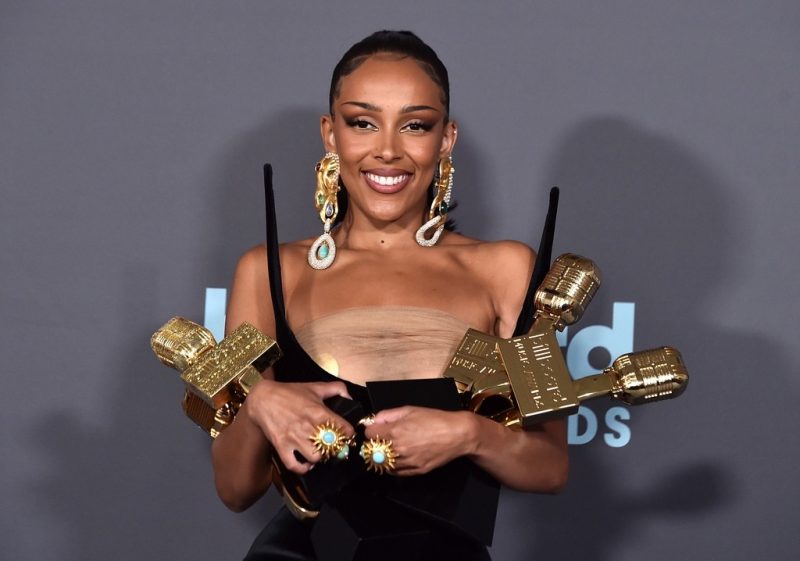 Many celebrities attended the 2022 Billboard Music Awards at the Las Vegas MGM Grand Garden Arena together with Doja Cat. The Weeknd, Travis Scott, and Morgan Wallen came together to glitz and glamour the event. Still, the event’s highlight was Doja with her talent and her most talked-about style statement.

Doja Cat’s album “Planet Her” bagged the singer the top R&B artist, R&B female artist, and the best R&B album nominations. Overall, she was nominated for 14 categories, including all the above and the top viral song (“Kiss Me More”). She continued her winning spree in four categories.

It was her talent but also Doja’s red carpet look that garnered the most attention. She wore a black, angular, chest-baring Schiaparelli gown with a sheer beige chest wrap worn over Agent Provocateur gold metallic pasties. Her accessories include a matching gold metallic Saturn-shaped purse, and a pair of gilded ear-shaped earrings adorned with several others.

Doja wore a set of nail rings designed by Bijules: black heels, a gold foot-shaped toe cap, and silver toenails. The world-famous rapper styled her hair in a sleek high ponytail. On uncovering her nipples on the Billboard Music award red carpet, she said, “You can have them out, and it’s not a crime.”

After winning at the Billboard Awards, Doja Cat also thanked her fans, saying, “I’m very grateful, and I’m excited to see more people win.” The artist also mentioned she feels “wonderful to be here tonight with everybody, and, yeah, thank you, mom, and, yeah, that’s it.’

Doja Cat’s trajectory to the top of the Billboard Hot 100 is unique. She had her first hit, “Say So,” coming in collaboration with Nicki Minaj. Dr. Luke, one of the most successful producers in pop, signed Doja, but the internet really made her hugely popular. Earlier this year, the artist also won her first Grammy. Doja Cat and SZA’s “Kiss me more” single shared the best pop duo/group performance award.