BET is Cooking Up the Next Big R&B Girl Group With Members  From Platinum-Selling Girl Groups Like Total, Danity Kane, 702, 3LW, Blaque and Cherish.

“BET Presents The Encore” is set to premiere June 9th. It will highlight eight former members from girl groups who had success in the ‘90s and early 2000s. Grammy-nominated R&B singer,  Nivea will also make a few appearances.

Aubrey O’Day (Danity Kane) Kiely Williams (3LW) Shamari DeVoe (Blaque) Pamela Long (Total) Irish & LeMisha Grinstead (702) Fallon & Felisha King (Cherish) Nivea (Soloist) will be the women making up the all star cast, as they must live together for 30 days to record an album at a home studio. 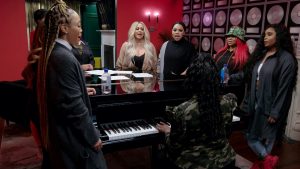 Interest in the series came last year after a clip of an old pilot featuring 3LW’s Kiely Williams and Farrah Franklin, who was apart of Destiny’s Child for 6 months after joining in 2000 along with Michelle Williams.

From there, BET noticed the clips attention it was getting, and gave the green light for a full season. It’s no doubt the women on the show are all talented and will sure make for a good season.