The leader of the Italian far-right, Giorgia Meloni, urges the country to break a taboo by electing a woman as prime minister. It appears that she has achieved her wish. After a clear majority was won by a coalition of her party and Fratelli d’Italia (Brothers of Italy), Meloni declared victory on Tuesday.

The achievement of a position of power by a woman must be a new feeling since it isn’t common. 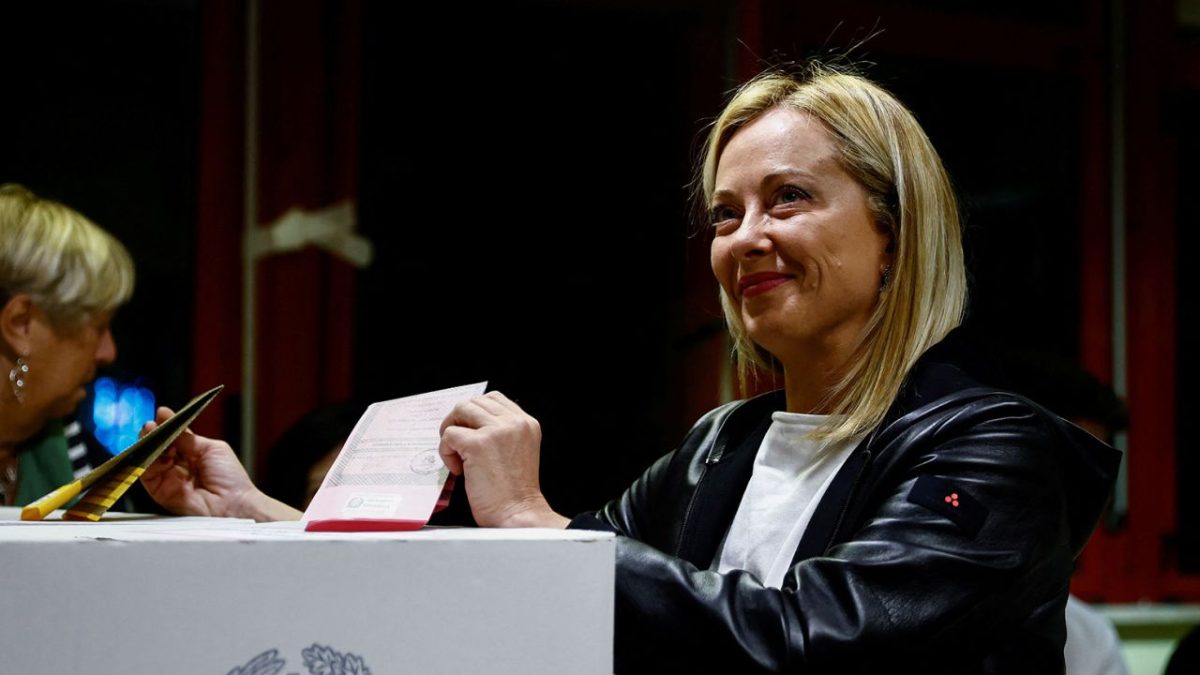 “Center-right in clear advantage both in the House and in the Senate! It will be a long night, but already now I want to say THANK YOU.”

The Feeling Of Triumph Was Palpable For Giorgia Meloni

After her victory in the election, Meloni addressed the media and her supporters, saying that it was a night of pride and redemption for many.

Three parties make up the center-right coalition: Fratelli d’Italia; the far-right League led by Matteo Salvini; and Forza Italia, led by Silvio Berlusconi. Berlusconi was convicted of tax fraud in 2011. In addition, he was named in a United States State Department report on human trafficking.

Moreover, in this election, the party was expected to lead a right-wing bloc receiving at least 36.5% of the vote. Under the most optimistic scenario, the coalition would obtain 46.5% of the vote.

Since World War II, Italy has had 67 governments come and go. This will be the first time a woman will lead the country. As seen from the left, Matteo Salvini of The League, Silvio Berlusconi of Forza Italia, and Giorgia Meloni of the Brothers of Italy attend the final rally of the center-right coalition in Rome. Credit: AP Photo

Following her victory, several Republicans expressed their support for her. The election results were praised by Senator Ted Cruz, R-Texas, as “spectacular.” At the same time, Senator Tom Cotton, R-Ark., tweeted that he was looking forward to working with her to further their common interests.

Congratulations to Giorgia Meloni and the winners of the Italian elections. We look forward to working with her and other Italian leaders to advance our shared interests. America is stronger when Italy is strong, sovereign, prosperous, and free.

Meloni has long-standing ties with many influential figures in the U.S. political realm. Throughout her rise to political prominence, Steve Bannon, a White House adviser under President Donald Trump, has also supported her. During the last Italian election, Fratelli d’Italia won 41% to 45%, significantly increasing from the 4% it held four years ago. Steve Bannon with Meloni in Rome in 2018. Credit: Alessandro Bianchi/Reuters

Giorgia Is Against The LGBT Movement

Moreover, Giorgia Meloni has been devoted to national conservatism since she was a child. She has been affected by having grown up in Rome’s Garbatella neighborhood, a working-class neighborhood with a solid leftist tradition.

As a 45-year-old mother from Rome, Meloni holds a deeply conservative position and is openly anti-LGBT. In addition, she has threatened to strike down unions representing same-sex couples legalized by the Italian government in 2016. As part of her remarks, she also called abortion a “tragedy,” causing women in the country to worry about their rights in the future.

Furthermore, Giorgia is a native Romanesque raised primarily by her mother. The absence of a strong father figure in her life significantly impacted her views regarding same-sex parenthood.

Influence is easily exerted on children. Single-parent households can influence your perception of relationships when you observe other individuals who have both parents. In addition, Meloni calls for the abolition of some of the threats she perceives as threatening Western civilization. These threats include LGBT lobby groups and gender norms, whose existence her critics deny, and radical Islam.

Given Meloni’s anti-LGBT views, her principles may spark a backlash from those involved in the LGBT movement or support it.