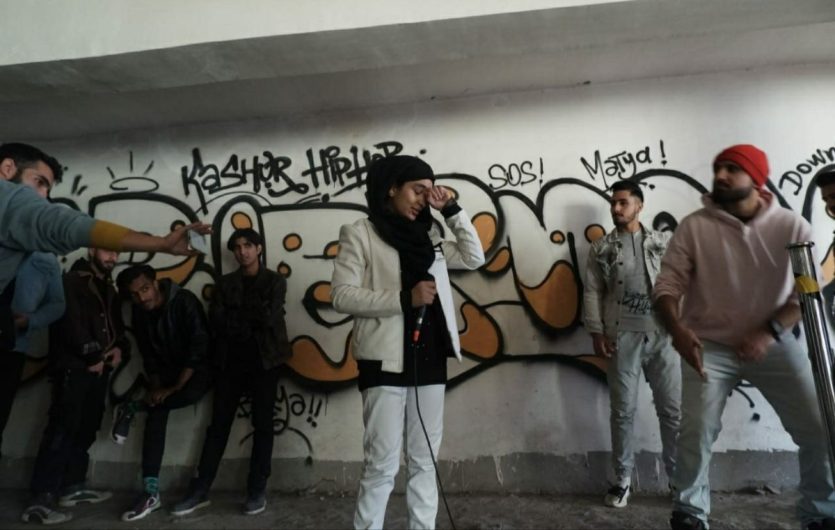 *In this story, the rappers are hiding due to Kashmir authorities’ threats. The people in this story have fictional names to protect them from harm.

Standing beneath a Chinar tree near Srinagar, India’s famous Zero Bridge, Rumi explains how the death of a stranger inspired his music.

Rumi says that nearly a decade ago, he witnessed a group of young boys throwing stones at an army bunker as he walked to work. These types of incidents are common in Kashmir, which is heavily armed. A soldier fired a bullet within a few minutes, hitting a passerby. Rumi recalls that the man died immediately.

“He was just walking, as I was, and died in an instant, killed as collateral damage,” he says, as the Jhelum River quietly flows nearby. 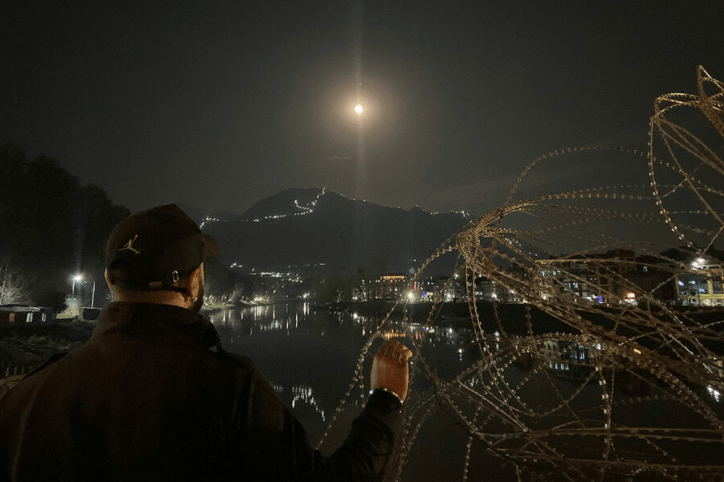 The rapper views the Jhelum River in Srinigar, India. Despite making music for a decade, he says the past three years have been difficult due to authorities cracking down on political dissent and free speech. Credit: Safina Nabi

Rumi, who is now 30 years old and has written many protest anthems for Kashmir, feels the pain from the incident. “As soon as I got back home, I narrated the whole incident in a rap form and recorded it.”

Like many young Kashmiris, particularly men, Rumi turned to rap as a means of protesting the violence he saw in one of the most dangerous regions of the world.

The Music Industry Presents A Challenge To Kashmir Rappers

Yet he has had difficulty making music since January 2019. The Indian government ended Kashmir’s self-rule status during that month and ordered a six-month media blackout on the region. Due to the subsequent crackdown on free expression, many Kashmiri rappers have left the music industry. However, the art form has survived by moving underground. Rappers say rapping is worth the risk to ensure the Kashmiri experience lives on.

Ruth Susan Mathew, who examines the rap music of Kerala, south India, remarks that hip-hop and rap always have focused on marginalized communities. Given that rap and hip-hop originated in Black communities in the U.S.

“Rap music in itself is a political art form,” says Ms. Mathew, who is currently pursuing her Ph.D. at Christ University in Bangalore. “That’s why it has a global reach and multiple societies throughout the world use it. Kashmiris, similarly, are using it in a way to voice their concerns [about] what is happening on the streets.”

Throughout his music, Rumi explores themes such as militarization, political self-determination, and the loss of cultural traditions in Kashmir. This predominantly Muslim region has also featured Pandits (Hindu priests and scholars) and Sikh communities throughout history. Having grown up in a Kashmiri Pandit family, the rapper draws inspiration from Sufism and spiritual poetry. Rumi keeps most of his music hidden nowadays to protect himself and his work.

“I have a strong feeling that times will change, and our raps will be referred to as the history of Kashmir,” he says. “Until then, we have to wait and keep resisting.” 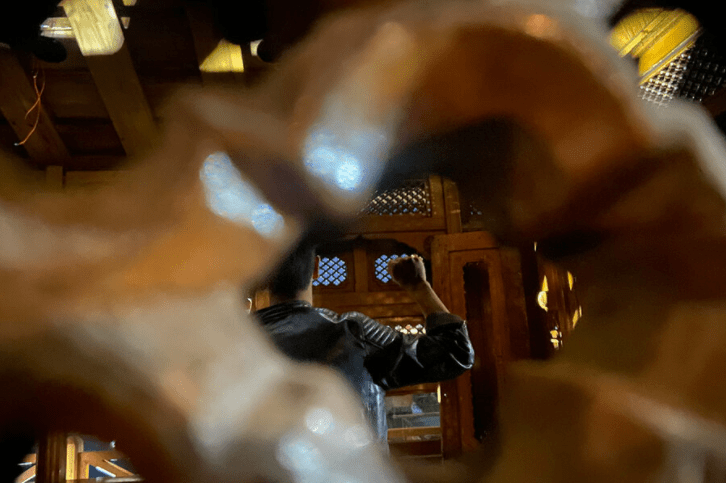 In Srinagar, India, a rapper raises his fist while walking across the old wooden bridge. In 2010, MC Kash, the region’s first hip-hop star, released the hit song “I protest”, which became popular in Kashmir. Credit: Safina Nabi

Kashmir became part of India in October 1947, subject to the condition that the state retains a degree of autonomy. Ultimately, the state will decide whether or not to remain a part of India, join Pakistan, or regain its independence. However, the vote has not taken place. As a result, Indian security forces and rebels have engaged in combat nearly continuously in the region. According to Human Rights Watch, Indian troops since 1990 “have engaged in massive human rights violations, including extrajudicial executions, rape, [and] torture.”

Over time, rap became a tool for peaceful resistance in Kashmir. The popularity of the trend rose after Kashmir’s first hip-hop star, Roshan Illahi, aka MC Kash, released his hit single “I protest” in September 2010.

Using Rap To Express Criticism About The Government

Therefore, many young musicians have turned to rap as a method of criticizing the government. In addition, musicians are reclaiming control over their stories, according to Mohamad Junaid, assistant professor of anthropology at the Massachusetts College of Liberal Arts. Growing up in Kashmir, he has written numerous articles about how the mainstream media portrays Kashmir’s militarization.

“No Kashmiri has been shown as a person who has aspirations and is capable of explaining or showing what they are going through,” he says, adding, “The rap music these boys make is a way of venting out their pain.”

Those connected to religious songs in the past find a form of emotional release in this genre. Ahmed grew up singing Naats (praises sung in the honor of the Prophet Mohammad) and verses from the Quran. However, whenever conditions in Kashmir worsened, he found himself drawn to resistance music, particularly rap. In 2014, he composed his first song in response to devastating floods.

“The Jhelum swelled and flooded the whole valley,” he says. “I could not help but think that the Jhelum was swollen with the pain due to all the things it has witnessed.”

In August 2019, more hardships arose. The Indian government has detained thousands of critics and journalists since the media blackout began. In the new policies, authorities have the authority to define “anti-national activities” and arrest individuals they believe are “likely to commit terror”. According to civil rights advocates, these are rules that effectively punish political speech. However, rappers such as Rumi and Ahmed remain committed to creating music.

Kashmiri hip-hop artists currently organize secret cyphers and freestyle performances at undisclosed locations. Rappers remove names and other identifying details from their recordings before uploading them on the Internet. In addition, to hope for peace, the lyrics also address issues of censorship and militarization. However, because local journalists are often detained and newspapers’ archives are disappearing, rappers feel an even greater responsibility to document everyday events in Kashmir, including violations of human rights.

Dr. Junaid asserts that regardless of whether the artists are actively seeking to record the past, that is what is occurring at the underground cyphers and unknown studios. “These [songs] are cultural artifacts,” he says.

As other forms of highlighting oppression slowly slipped away, Ahmed knew he must continue his music. “After 100 years, when people will come back to my songs, they will get to know what happened in Kashmir and may feel what we are feeling right now. This is the only purpose of doing what I do,” he says.

Despite the risks, the young rapper says he relies on imagery and symbolism to avoid legal trouble. “I frame the sentences in a way so that no one is offended, keeping my work and myself safe,” he says.

Although Ahmed carefully constructed his lyrics, police interrogated him. After his songs went viral and he received a call from the security forces about them, Dayaan* felt obligated to remove all traces of his art from the Internet.

“I became quite popular as the lyrics were written in such a manner that everyone could relate to them. But I had to delete everything from my YouTube channel for my own security,” he says.

Eventually, he discovered cyphers in the underground scene and joined a community of other Kashmiri rappers.