On Tuesday, August 2nd, the world had ringside seats to a domestic dispute between Blueface and Chrisean Rock. Videos of a hardcore street brawl between the two went viral. The heavily rotated video that ended in the two parting ways that night was positive proof that the back and forth was brutal. However, by and large, they seemed un-phased. But the levels to which the two went created quite a buzz of Twitter reactions and had people questioning the normalization of abusive behavior.

Tbh at some point everybody from LA has fought they partner on Hollywood blvd it’s part of the experience https://t.co/9nKh6TQQBa

So this started over him going through her phone and catching her cheating??? Why she mad!??. https://t.co/hcYKet71br

if you, as a woman, hit a man…please don’t act surprised when he swings back. especially if you’re under the influence. abuse doesn’t have a gender https://t.co/whmVzNn4fp

Blueface and Chrisean’s History of Violence

This is not new news for this pair. These two have a record of violence in general. And this is not the first time the two have been engaged in a fierce exchange. In November of 2021, Blueface and Chrisean were engaged in a struggle that ended in police intervention. Although more verbal than physical, it was enough to raise eyebrows. According to The Sun,

The exchange was only halted by police intervention as an alleged contract dispute turned nasty.

However, this interaction’s explosive nature seems to have reached peak toxic levels. Most would think, given the signs, the past, and the street bout, the two would stay away from each other. But unfortunately, that is not the case. A few days later, the two were in the same room having a discussion in front of the entire world.

When is it Too Much

The newest struggle and aftermath raise many questions about normalizing domestic abuse. Because what occurred was WorldStar behavior; slaps, punches to the head, dragging, and more. The exchange was next-level brutal, the kind of action one would see in a ring, and one that should end in charges. But today, it is as if nothing happened. As entertaining as it might have seemed to some, the entire situation is problematic. There are undoubtedly psychological issues that need to be addressed. One tweeter summed up perfectly,

I hope one day she’s understand this not love shit the both of them need to realize they need leave each other alone https://t.co/gYI79j69I1 pic.twitter.com/5VfCjvyHSb

Blueface vs. Chrisean: The Aftermath

A few days after the altercation, Blueface posted to Instagram. But it wasn’t him alone. He was alongside Chrisean, who was lying in bed. There were a few quips which punctuated the post about Chriseans fighting skills. But this wasn’t a quarter of it. He went on to lay out all of her business. He also suggested to the Chrisean that he would pay her to leave him alone. According to the post, Blueface stated,

“What, you need to leave me the fuck alone?” Fuck it. One hundred thousand.”

The Normalization of Abnormality 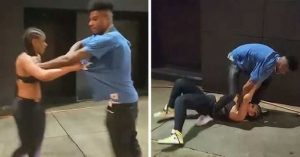 It is undeniable that this is wild. Of course, it’s week-old news, but the nature of that behavior needs addressing. For these two, it’s not abnormal behavior as these two seems to attract trouble with their violent nature.  Before signing with Blueface, it is rumored that Chrisean duked it out with his ex. Likewise, Blueface is also known for his aggressive behaviors and penchant for starting stuff. Nine months ago, FM Hip Hop provided coverage on an incident involving Blueface; he was hit with felony warrants for an attack at a nightclub. Therein lies the problem.

There is too much of this going on in the community. And too much of it is being glossed over.  The increasing prevalence of these incidents and responses raise questions and serve as barometers of an underlying illness. Has the world become too desensitized to this type of toxicity in the hip-hop community? Are the increased instances of anger, devaluation, psychosis, and abuse indicators of a more insidious issue in the community? What are the ramifications? More importantly, how can it be addressed?