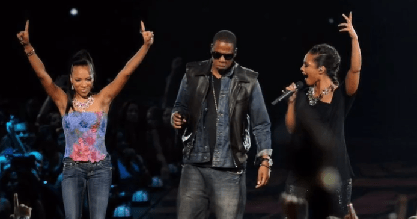 Anyone who’s ever gone to a concert can tell you that emotions run high. It is easy to get swept up at the moment, to lose oneself to the music. This is true whether the venue is a star-lit stage in New York or an orchestral amphitheater. Generally, this entails cheering, singing along, or eye-closed feeling the rhythm. Generally, people don’t jump on stage and harass the musicians. It’s understandable that Jay-Z was a little bit heated after Lil Mama invited herself on stage mid-performance. The artist was so moved by the music, she was unable to stop herself from climbing on stage and joining Hov and Alicia Keys as they sang “Empire State of Mind.” Now, over a decade later, Jay-Z has finally, publicly, forgiven Lil Mama.

Way back in 2009, when crowds could still gather and people could bundle into a room together, Jay-Z and Alicia Keys put on a performance for MTV at the Radio City Music Hall. One native New Yorker felt so much passion hearing “Empire State of Mind,” that she just had to get involved.

She crashed the performance and jumped on stage. Although the singing continued uninterrupted, the damage had been done.

“I would never, I mean me, personally, I would never do that. I would never have the nerve to do that. […] It’s just like, someone’s up here performing […] and we worked really hard with the performance to put on this show for people, y’know, and to interrupt that moment for us, […] I don’t think that was the right thing to do.”

Jay-Z took offense to the rude and unprofessional interruption. He didn’t confront Lil Mama but was more than happy to comment during an interview on The Angie Martinez Show. The artist says that Lil Mama angered him, and he likened the event to Kanye West interrupting Taylor Swift.

“I actually thought it was the equivalent to what Kanye did to Taylor Swift but nobody really talked about [Lil Mama] because I’m not a little sweet girl from the middle of Mount of America.”

For her part, Alicia Keys had no trouble forgiving Lil Mama. However, that’s probably because Keys never even knew she was onstage.

“Listen, to this day, I truly never knew she was even on the stage — that’s the craziest part of the whole thing for me,” she said. “I was on that stage, [JAY-Z] was in the middle, she was on the other side of Jay, and I never saw her.”

However, just yesterday as part of a conversation hosted by Alicia Keys, Jay-Z finally admitted to forgiving Lil Mama. When asked directly about the incident, Hov responded, “Yes, yes of course. She our sister, we love her.”

All seems to be forgiven, and no harm was done. Jay-Z however, closes the chapter with a reminder, “I wouldn’t recommend people just jump on other people’s stage.”