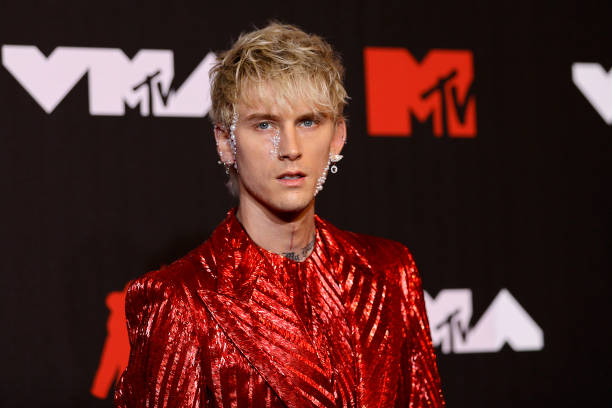 Machine Gun Kelly is certainly a punk rock artist.  He performed in Madison Square Garden earlier this week on his “Mainstream Sellout Tour”.  The tour has 27 more stops and includes Trippie Redd, Willow, and Iann Dior.   After the show was the after party of course.  During the party, MGK decided to smash his face with a glass!  He was on stage with a champagne class in one hand and the microphone in the other.  After screaming that he didn’t care about anything, the rock star breaks the glass on his face.  With blood coming out of his face, he remains on stage and performs his song, “My Ex’s Best Friend”.

People can’t stop talking about @MachineGunKelly smashing a champagne glass on his face and then bleeding while celebrating the premiere of his new @Hulu documentary and selling out Madison Square Garden (🎥: @machinegunkelly) pic.twitter.com/8ZOAG9JGmQ

On his Instagram page, you can see the two clips in which MGK looks as if nothing happened.  In the morning after, he takes to social media again posting his reaction of what he did the night prior.  The Ohio-raised rapper appeared shocked and disgusted.  Yesterday, he appeared on “Late Night With Seth Meyers” where he explained the incident.  He said he wanted to quiet the crowd, but he did not have a fork.  So, he used his head instead.  Also, this may be hard to believe, but MGK did not wait until after his concert to spark headlines.  He was even on one during his sold-out show!  During his set, Kelly decided to come at one of the crew members.  He aggressively ran off the stage shouting towards the man until his team member held him back.  MGK ran right back on stage to smash a guitar before the end of the show.

Machine Gun Kelly confronted a crew member at Madison Square Garden. Shortly after, he smashed his guitar on stage. pic.twitter.com/UQouprjyDf

Machine Gun Kelly has had a few dark times in his life.  He details a time specifically in his new documentary, “Life in Pink”.  Streaming on Hulu, the rapper turned rocker admits he almost committed suicide.  In July of 2020, Kelly’s father passed away and he did not know how to cope.  His girlfriend, Megan Fox, was out of town working while he was all alone.  At that time, he was sleeping with a shotgun every night from dealing with paranoia.  One day, he turned the shotgun on him, but fortunately he did not pull the trigger.  As a result, Kelly decided to stay off drugs with the help of Fox and his daughter.