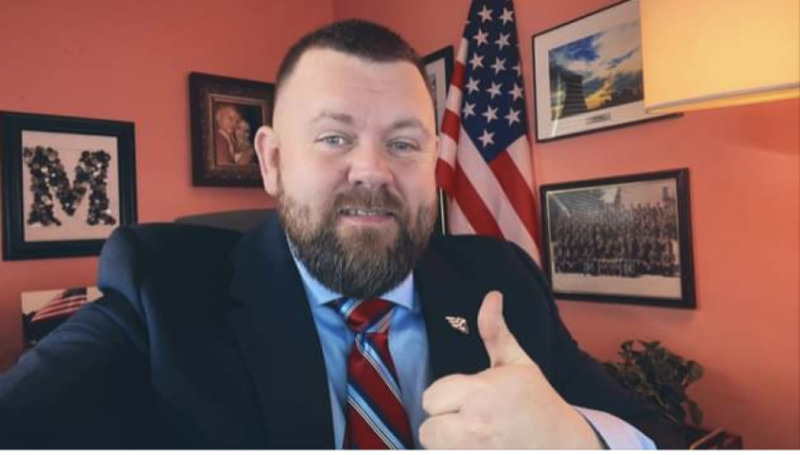 A MAGA rapper painted his lawn in support of Donald Trump and won the Republican Primary for Congress. Image Source: Facebook

Last month, Donald Trump attended a rally in Delaware, Ohio, to support his preferred candidates in the Buckeye State. Among them is J.D. Vance, who won the Republican Party’s nomination to serve in the United States Senate. Trump departed from his prepared remarks on numerous occasions during his speech. In addition, he heaped praise on J.R. Majewski, a local man who painted Trump murals on his lawn.

Majewski runs for Congress in the Ohio 9th District, which Trump did not mention. As a result, J.R. triumphed over a field that included several state representatives to win the Republican primary for Ohio’s 9th District on Tuesday night.

Majewski Is A Trump Loyalist

Majewski’s loyalty to Trump goes far beyond his property. Last year, he attended a rally called “Stop the Steal,” which took place before the attack on the Capitol. Additionally, he is a member of QAnon, an Air Force veteran, and a MAGA rapper.

this is jr majewski, who just won the gop nomination for congress in ohio last night, "rapping" his verse of "let's go brandon." i can't. (h/t @daveweigel) pic.twitter.com/NHlls51HQV

“Joe is focused on ice cream while he’s crappin’ his pants,” Majewski raps, among other lines regarding wakingness, and calls for a wall along the border. Even though the rhymes are awful and Majewski is wearing a “Let’s Go Brandon” shirt and loose-fitting cargo shorts, the message is equivalent to that of the Republican Party going into the midterm elections.

Here is a look at the painted surface that received the praise of Trump last month. It is a large lawn, not a “farm and those plains.”

Stopped by that one Ohio neighborhood where the guy painted his whole lawn for Trump pic.twitter.com/TTvB9IVbyf

On Tuesday, Majewski’s primary victory was considered a surprise. However, it probably should not have been a shock. Conservatives in the modern era have become accustomed to outrageous displays of support for Trumpism and the casual repetition of culture-war talking points. In this fashion, J.D. Vance won the party’s endorsement for the Senate (but in more formal clothing, without rapping, and with the help of Tucker Carlson). Also, Majewski has taken a step toward becoming a member of Congress.

Democratic Rep. Marcy Kaptur has represented Ohio’s 9th district since the early 1980s, but a recent change by Republicans leaves it at risk. According to the New York Times, Trump would have received three percentage points more in the newly drawn 9th district. So there’s a reasonable chance Majewski may ride his tractor to Washington.