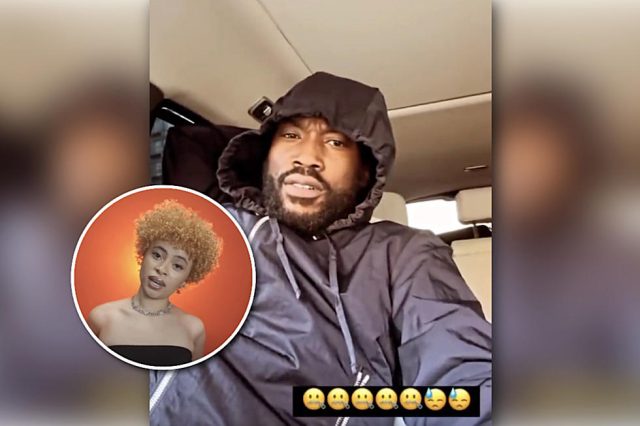 On Saturday, October 29th, Meek took to his Instagram story to show some love for Ice’s song. In the video, Meek seems to be boarded on an airplane where he reveals his new freestyle remix to “Munch.” The rapper also posted a picture of himself on stage captioned with lyrics from the remix, “That money I gave you wasn’t even enough.”

Meek isn’t the first rapper to freestyle over “Munch!”

Meek Mill is the most recent rapper to preview a remix over Ice Spices new track. However, he is not the only artist to cover the popular drill song. Back in September, Symba dropped his version of “Much” where he seemed to be taking a jab at some of the women in his circle. Just a few weeks ago, Cardi B also teased a small “Munch” verse, although she said she wont be dropping an official remix.

Cardi B previews a remix to “Munch” by Ice Spice 👀 pic.twitter.com/BzqhGH9Biy

Fans chime in with their opinions on Meeks Version of Munch!

Fans on Twitter are not taking this remix seriously as one user asked if this was a joke. Another stated that Meeks remix to “Munch” is one of the funniest things he’s heard in a minute, while a different fan said the remix goes hard on mute.

tell me I didn’t hear a Munch remix with Meek Mill on it. please tell me that was a joke pic.twitter.com/W8sTHkYQr3

On October 1st of 2021, Meek dropped his album, Expensive Pain. On the first anniversary of the album, the artist took time to reflect his money in the game. He said, “1 year Anniversary to the last album. Idk how money I made off it or had no control over the overall plan and I only made 13% off it lol.” He continues to add that he going to make 10 million or more off every album he decides to drop. The “Going Bad” rapper explains, “I was caught up in that slave sh!t that’s why I been taking long.” Meek wrote that everything he does flames, and that they don’t promote music with morals in the system.