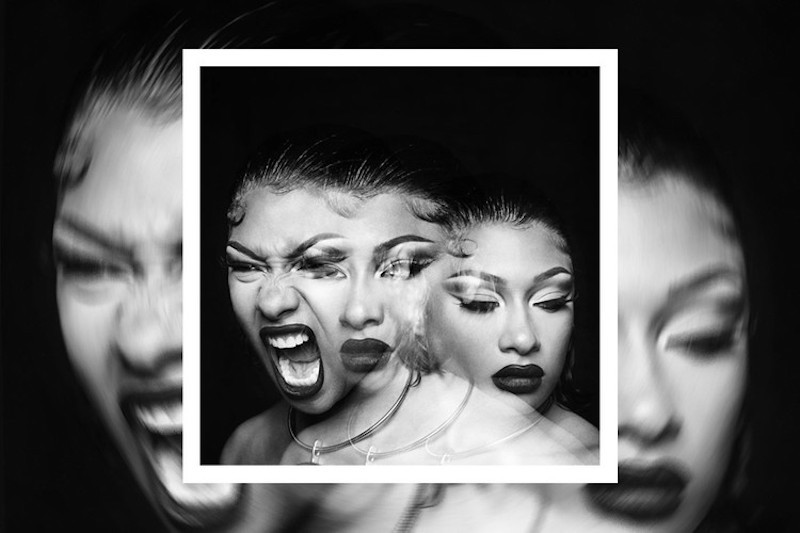 The cover of the new Meg Thee Stallion's "Traumazine" album.

The Houston artist has been through hell and back with her label, haters, and the courts. “Traumazine” marks a more mature development in Meg’s career. It combines the cheeky bombast the 27-year-old is known for with some real venom for the naysayers since soaring to star status in 2019 with the “Savage” Remix feat. Beyonce.

Megan Thee Stallion has had a fascinating career path. While her list of accomplishments has continued growing longer and longer, so have her controversies and setbacks.

Drawing Up The “Traumazine” Era

Only two months after grabbing her first Billboard #1 hit, Megan was reportedly shot in the foot while riding around LA with Tory Lanez and Kelsey Nicole. In addition to the physical repercussions, Megan has been the target of vitriol amongst professionals and online trolls alike.

Meg and her accused gunman Tory Lanez have come to blows several times on Twitter and through their music. And with the trial postponed by Tory’s lawyers for a third time this past July, Megan is still in the thick of it.

That’s not even getting into the extensive label drama with 1501 Certified Entertainment and Carl Crawford. In February, Megan sued 1501 after being told her project “Something For The Hotties” didn’t count as an album and wouldn’t go towards her contractual obligations. In response, Carl Crawford counter-sued the southern MC stating Meg still had music and money she owed. Specifically, Carl is seeking earnings from “collaborations, sponsorships, endorsements and side engagements.”

The tension between the young hitmaker and Crawford has been brewing for quite some time. Before this current legal battle, Megan sued 1501 in 2020 twice for blocking her music from being released. According to Megan, the troubles all began when she attempted to renegotiate her contract. Since then, it’s been nonstop social media fights and courtroom visits for her and Carl Crawford.

To say that Megan has plenty to rap about this era is a massive understatement. So far, Meg has primarily found success in TikTok dance anthems and club bops, but an aptly titled “Traumazine” offers a rapper unaffiliated with label execs and PR teams. It’s Megan at her most unfiltered, and it’s exciting.

Swinging Out The Gate

The album starts with “NDA” and “Ungrateful,” two tracks showing Megan’s dominance in the realm of female rap. With “NDA,” Thee Stallion makes it clear she’s not interested in clearing up grudges. The first verse mainly speaks to the recent real-life tribulations Megan has endured recently.

“Ungrateful” is the album’s first feature with a verse from Key Glock. It’s a similar track to the opener, just three straight minutes of contempt towards all her doubters. One consistent factor in “Traumazine” is an aggressive flow from Megan. The album starts on 100 and doesn’t let up off the pedal. In comparison, the featured artist here seems more relaxed and laid back with their bars. This is very much apparent with Key Glock, whose verse almost feels like a screeching halt on “Ungrateful.”

This is swiftly improved upon with “Budget” featuring Latto. The two southern belles play off each other and easily compliment each other’s style over-top a fun bouncy beat. It’s a nice detour into a more pop, dance-centric direction after a pointed start to “Traumazine.”

“Her” is another clear contender for this albums club hit and the obvious single. The beat is straightforward but speaks to the current popularity of 90s-inspired house music with its steady pulsating tempo. It’s worth noting this is the song selected for Megan’s “Good Morning America” performance to kick off the album promo. So we’ll likely be hearing it plenty more soon.

Something From Meg To The Hotties

“Gift And a Curse” and “Ms Nasty” gets Megan deep into her flirty side. Particularly “Ms Nasty” taps into the song that initially made her the one to watch, “Freak Nasty.” Just like that 2019 hit, Meg isn’t scared to tap into her femininity and get candid about her sexuality. In a climate where sexual bars from female rappers are often under scrutiny, Megan is determined not to compromise her style for the wishes of others. If you’re a fan of Tina Snow at her hungriest and most aggressive, “Traumazine” certainly won’t disappoint. However, if fun and sexy Meg is what made you a fan, she doesn’t neglect that either.

“Red Wine” is Megan at her most explicit. It harkens back to deep cut and fan favorite “Cognac Queen.” Not just with its x-rated lyrics, but the use of a romantic slow jam to accompany Megan’s forceful rapping.

“Traumazine” is packed with a wide variety of guest artists. “Scary” shows off a feature of Megan’s that often goes unnoticed. Her ability to match feature artists’ energy is almost chameleon-like. That’s especially true with “Scary,” featuring Rico Nasty. Rap fans familiar with the DMV rapper know Rico usually employs unusual “creepy” beats with screams blended throughout to match her alt/punk style. That’s precisely the case here, and seamlessly Megan jumps into it without any awkward hesitation.

This quality rears its head again with “Star.” This track incorporates some singing into Megan’s style to match Lucky Daye’s classic RnB sophistication. Of course, Daye dominates vocally, and Meg doesn’t try to overplay her hand. This leads to a nice blend between an unexpected duo. “Consistency” is the other vocal duet on “Traumazine,” and Meg sticks strictly to her rapper role this time. They’re both excellent efforts, but “Star” sticks out slightly more.

“Not Nice” is easily the most cutting and angry song on “Traumazine.” On this track, Megan shows her vulnerable side. Behind all the glamour, confidence and bravado is a young woman still coping with immense stress and bullying. The lyrical content in “Not Nice” goes deeper than Meg’s usual brags and disses. No names are dropped, but it still comes off scathing.

“Bitch, I kept your bills paid, you were sick? I paid for surgery (Hm)/But I pray you boo-hoo, do me wrong, where they deserve to be/I guess my skin not light enough, my dialect not white enough (Damn)/Or maybe I’m just not shaped the way to make these niggas givе a fuck”

This is followed up later in the album with an even more emotionally exposing “Anxiety.” Here, Megan not only touches on her mental health struggles but gives us a look into her psyche.

Getting To The Root

Loneliness is a massive theme in “Traumazine.” Meg feels incredibly alone for a celeb so often surrounded by crowds, whether it be parties, concerts, or festivals. She shows self-isolation throughout the album, but specifically on “Anxiety.” Her mother’s untimely passing occurred early in her career, and Meg’s father died before she was thrust into the spotlight. It’s easy to forget all Megan has been through before the brand deals and accolades. She landed an XXL Freshman spot in 2019 and her first Grammy in 2021. With how fast Megan gathered all the success, it appears from the outside looking in she has a silver spoon handed from the industry. But in “Anxiety,” Meg strips down this perception to reveal the real her.

For Megan, this is a marker in her career and a frontrunner for the best song on the album. Aside from excellent flow and delivery, perhaps the most diverse on “Traumazine,” the hook is catchy and captivating all at once. It’s an achievement for an artist many have put into a tight box.

“Flip Flop” is a song that uses a slow RnB melody as a backdrop. But unlike “Red Wine” and “Cognac Queen,” this track reads as absolutely tragic. Nearly every bar details Megan’s desolation as a person and artist.

“Behind this smile, I’m fighting these tears.

I don’t really know who I can trust/I was looking for anything, anybody Looking for something to feel like something/I was hanging with bitches I thought really loved me

Whole time they was jealous and judging.”

At this point in “Traumazine,” to say that Meg is a one-trick pony is simply not true. The versatility in subject matter and flow make this project her most well-developed. Not since 2018’s “Tina Snow” has she been this on point.

“Traumazine” rounds out with this era’s lead singles: “Pressurelicious,” “Plan B,” and “Sweetest Pie.” It’s a much lighter-hearted ending to an album full of digs and jabs.

“Pressurelicious” with Future is a standard offering from Meg, if not slightly generic. It’s the most extended feature verse on “Traumazine,” and Meg puts her prolific rap feature to good use. It’s nothing incredibly unique from Meg at this stage of her career, but it’s obvious why it was chosen as a single. What it lacks in ingenuity, it makes up for in sheer catchiness. This is a similar case for “Sweetest Pie.” Just like “Pressurelicious,” it employs a colossal name to play partner to Meg. While this wasn’t a vast Billboard smash for either artist upon its initial release, it may become a cult classic over time. “Sweetest Pie” has one of the most addictive hooks on the album, and you’ll be humming along before you realize it.

The true standout from the crop of lead singles from Traumazine is “Plan B.” You may remember this song going viral even before its release when Meg performed at Coachella this year. Before the music video teaser was revealed, “Plan B” was already considered a hit with fans on social media. This clout was quickly followed up with the music video sitting at 11 million views. It’s obvious why this 90’s inspired track saw success so soon. The Lil Kim-eque beat lends itself to Megan’s signature flow flawlessly.

So what’s the takeaway from “Traumazine?” Well, it’s a fitting title, that’s for sure. In an interview with “Good Morning America,” Meg delved into the meaning of her album title. “I was really confronting my real feelings,” she explained. “I really want y’all to get to know me so I had to make up a word for what we’re doing now,” the term was further defined by Meg in an Instagram post earlier this month. “The chemical released in the brain when it is forced to deal with painful emotions caused by traumatic events and experiences,” the graphic read.

Painful emotions are the underlying thesis of “Traumazine.” Without ever coming off whiny or sniveling, this young rapper has accurately given her fans a window into the negative emotions piling up since her 2020 shooting. It’s not a plea for help but a defiant statement that she’s here to stay. Lawsuits and alleged ex-lovers are damned.