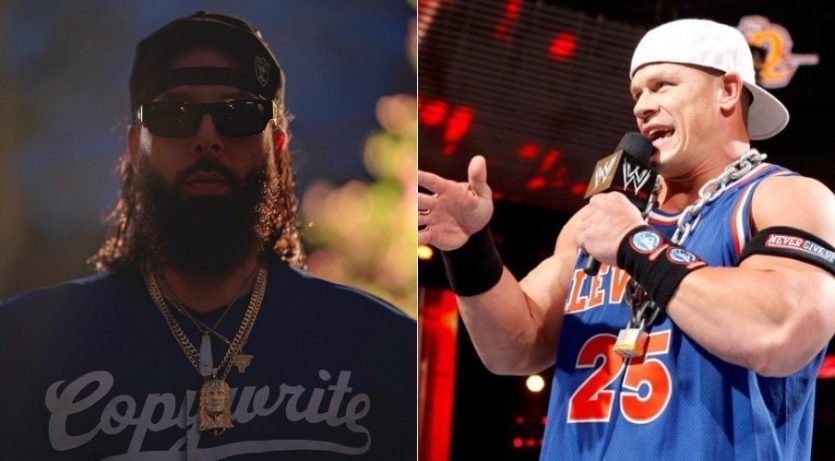 The veteran underground rapper accuses him of stealing his lyrics for his music and WWE performances. The third track on the album is titled “Spoiler Alert / Have U Cena?”

John Cena Is A Fan Of Copywrite

Previously, Cena stated that he is a fan of Copywrite. Cena performed a heel rapper gimmick in the early days of his career. In May 2005, he released his “You Can’t See Me” debut album with his cousin Tha Trademarc.

Furthermore, John originally played the Dr. of Thuganomics from 2002 to 2005 before adopting his current persona. Also, he brought back this gimmick for a promo segment on Raw before his WrestleMania match against The Rock. As well as in 2019 for his in-ring segment with Elias at WrestleMania 35.

Additionally, on track 3, titled “Spoiler Alert / Have U Cena?”, Copy reveals the theft of his lyrics for Cena’s music and WWE performances in a series of lyrics.

Copy discovered that Cena plagiarized his lyrics for his WWE act on YouTube.

“I got the news from a fan out the blue, at first I think was the truth/ til he sent the YouTube link as the proof/ now I’m tryna think what to do,” he said.

Moreover, Cena’s embarrassment stems from the fact that it became evident to the veteran rapper that his lyrics were manipulated without his consent, as Copy raps “bit it, it was so apparent.”

Using sharply crafted, vicious bars in the second half of the song, he comes at Cena with even greater intensity following a beat change. Lines like “lies, what your rap career is based on” and “right now, John loves to play emcee” expose Cena’s biting heavily. It also shows that he has used plenty of lifted lyrics in crafting his rap act for WWE.

“Spoiler Alert / Have U Cena?” is a powerful diss track that rips into Cena from every angle. Most importantly, biting lyrics and styles are a grave offense in hip-hop history. However, in terms of stealing without regret, John Cena appears to have committed these sins. “Spoiler Alert / Have U Cena?” delivers big surprises on every level. Cena comes into the spotlight as Copy evaluates the situation and throws lyrical darts at him.