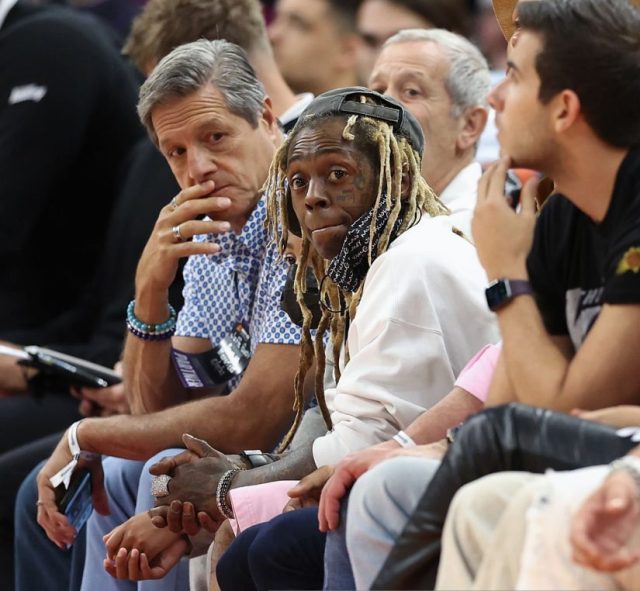 Rapper Lil Wayne had an ouch moment in Game Seven of the  2022 NBA Playoffs . On May 15, Dallas Mavericks defeated the Phoenix Suns during Game 7 . It was a marvelous win for the Mavericks, owing its success to Luka Doncic. His performance in the game garnered world-wide attention through social media. By defeating one of the best teams in the  Mavericks showed the Suns exiting the playoffs. This defeat also teaches a lesson to Rapper Lil Wayne.

However, apart from this game, one more sensational story going on behind this game. Lil Wayne, world famous rapper in the hip-hop music during Game 4 insulted Luka Doncic. Unimpressed by Doncic’s attitude on the court, Lil Wayne called him a “ho” on Twitter on May 8. His remark did not go well with the media and NBC fans. Doncic’s amazing performance on Sunday, scoring 35 points, along with 10 rebounds, four assists and two steals literally silenced Lil Wayne’s outrageous remark.

After Maverick’s victory, fans took Twitter blaming Wayne for the Golden State Warriors’ loss in the game. Rapper Dizzy Wright added, “I blame lil Wayne for the way Luka acting right now lol sheeeeeeshhhhh.” Mavs owner Mark Cuban decided Wayne hadn’t suffered enough and chose violence on Monday when he tweeted out lyrics to Lil Wayne’s song, ‘Uproar,’ in a dig at the rapper, who was sitting courtside for the 33-point blowout.  Maybe, Weezy will think next time before he tweets about basketball, because there’s no question he messed with the wrong person”.

Wayne had a oops moment

Lil Wayne was also present in the Game 7. He was there to support his friend Chris Paul. According to ESPN’s Skip Bayless, “My brother Lil Wayne told me Friday he’d be there for Chris Paul this evening in Phoenix – and he’s right there in the front row. They have a deep connection from CP3’s days in New Orleans. I sure hope he inspires CP3 to snap out of his funk/slump.”

The moral of the story is one should never badmouth anyone in public platform. It always back fires. Lil Wayne blamed for the Sun’s unfortunate defeat!